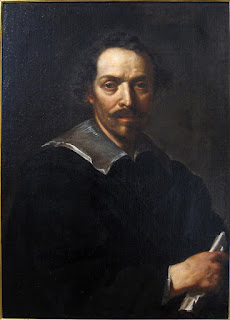 Pietro Berrettini was born in his namesake city of Cortona on November 1, 1596. One of the greatest giants of the Baroque era, his name has unfortunately lost much of its former glory in the shadow of others. What makes Pietro unique is not necessarily his technique but his approach to art—nicknamed cortonismo by his peers— essentially a monumental scale with multiple figures and grandiose storytelling. Pietro also did interior decoration and some architecture, and with his powerful patrons of the Barberini family he was able to secure some very large commissions, including massive ceiling frescos that have to be seen to be believed. For a period of four years he was also director or principe, of the Accademia di San Luca in Rome in which he designed the building for. It was the second greatest school in Italy (Accademia degli Incamminati was the first) which fostered a long list of teachers or principe that any art student today could only imagine, including Bernini, Domenichino, Vouet, Mengs, Rusconi, and Canova among others.

In the above self-portrait Pietro, painted somewhere in his early thirties, reveals a rare, serious look at the man, not just the painter. Distinguished but tired and overworked, his steadfast gaze seems to belie an unknown pain or insecurity. Pietro uses a palette of both warm and cool skin tones to create a sombre, real portrait. 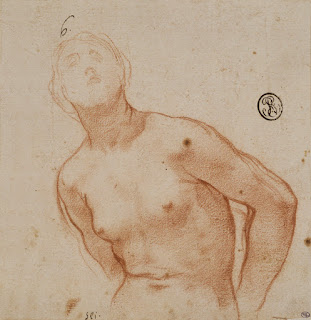 This lively study, sometimes attributed to Ciro Ferri or both him and Pietro, is one of my favourite sketches. Palpable, solid, yet loose...Pietro was solving a problem of asymmetry and strength while still appearing feminine. Note the loose contour lines in her arms. By leaving the face unfinished Pietro creates a dynamic figure lit from above with uniform shading except for dark accents on the bones of the shoulder, elbow and ribcage. 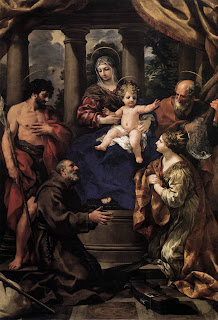 
Pietro creates an unusual pentagram-like arrangement of the figures with baby Christ off-center. The direction of everyone's gaze reinforces the pentagram. Drapery was a signature skill of Pietro as is evidenced here in all of the figures, especially to the saint on the right. The color harmony of reds, blues, browns and yellows are a tribute to the ingenuity of Pietro's eye, and each figure resembles a sculpture. The near perfect arrangement is lacking something, and perhaps it could be a lack of sincerity in the depiction of St. John and St. Peter. This does bring to mind the famous debate that Pietro had with his former student Andrea Saachi, who criticised the use of multiple figures in favor of simplicity and emotional individuality. Read more about the debate here. 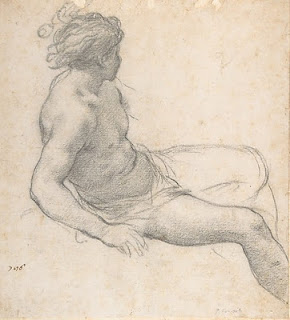 Again, Pietro's gift for spontaneity in his gestural sketches are something lacking in his paintings, which are too refined in some cases. Here the figure is bending forward again slightly, but foreshortened and seated. 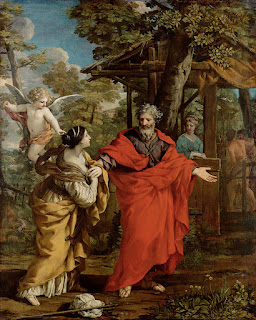 Vibrant color completely dominates this piece, rendering the figures in a daylight that seems almost too natural for the subject. Against the tenebrist trend of the Baroque, Pietro focuses more on drapery and body language to convey the ideas behind the scene. Hagar is beautiful and sculptural, while Abraham majestic and strong in his flowing red drapery. Pietro puts them both against a verdant background of tall trees and deep blue skies. Note the baby angle chiding Abraham. Read more about the story here. 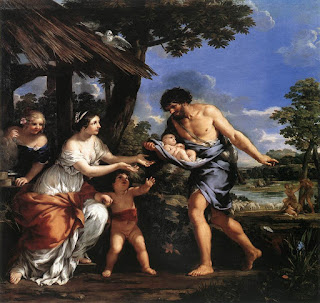 Romulus and Remus Given Shelter by Faustulus, ca.1643

One of Pietro's best works, he incorporates subtle chiaroscuro with vivid color harmony, dynamic body language, and a composition which creates a sense of movement. The sense of anticipation by the figures on the left waiting for Faustulus, is a brilliant compositional device. Pietro creates a pre-Roman Eden world behind them with a pastoral landscape and intense blue sky, and the balance of red and blue in the main figures here pulls the eye into the painting. Pietro's drapery is vivid and intense...note the crafty brushwork on both of them. 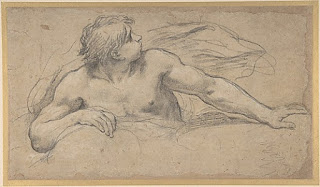 
A highly dramatic work, we see a tightly packed vertical composition that manages to create a physical sense of being thrust into the painting. Pietro's use of movement combined with perspective is juxtaposed with reds and greens to heighten the enfolding crisis. An early Roman martyr, St. Lawrence is depicted here about to be burned alive on top of a gridiron. Note the contrast of forceful and helpless arms in this painting, pointing in all directions. Here the color harmony that Pietro adores so much is now muted by the action, and he also contrasts the swarthy skinned men with the pale bright skin of St. Lawrence and his flowing robe above his knees. Note the vertical space between the ascending angel and St. Lawrence. Pietro had an astute understanding of body language. The figures on the left are in murky shadow, something Pietro has never done before in a painting, and it works perfectly. Compare with this version by Valentin de Boulogne. 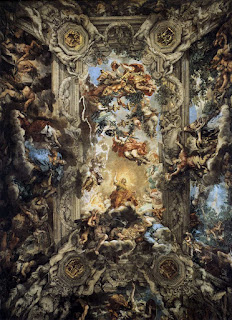 A ceiling fresco in a massive room of the Palazzo Barberini in Rome, this small photo cannot begin to describe the scale and force of this immense painting. I was in this room and found my neck becoming sore after staring up at this for what seemed like time standing still, and I remember a flat sofa in the middle of the room with two women lieing on it, gazing up at this masterpiece. Pietro was a jack of all trades, an artist who wore many hats and whose skills need to be acknowledged, even if his grand manner sometimes made cartoonish faces...it was his versatility and craft that rose the Baroque to a new level, and his work needs to be studied continually.