Born on January 4, 1866 in Barcelona, Ramon Casas i Carbó was a Spanish portrait painter and graphic designer. He was a contemporary of Santiago Rusiñol, both founders of the Spanish art movement modernisme. Where Santiago painted pensive interiors and moody landscapes, Casas focused more on the portrait and figure with a penchant for costume and posture. His palette often consists of more muted tones with vibrant color accents. Casas enjoyed a lengthy and prominent career throughout Europe and South America where he often exhibited in shows with his friend Rusiñol.

In Open Air Interior above, Casas encapsulates a quiet moment outdoors during tea time. I love these kind of paintings for their calm visual intensity. The way that man sits in his chair, lost in thought while his wife carefully stirs her tea...this is the kind of mindfulness in the subjects that makes us, the viewer, envision ourselves in this scene. Casas paints the far wall of the house in cool greys and yellows with a soft light coming from the far right of the composition that gently bathes the man and woman in transparent shadow. Note how the floor warms in tone dramatically under the feet of the figures. Casas uses the mat and plant for green accents that compliment the foliage outside beyond the edge of the house on the right. I don't think I can ever tire of watching this painting.

Look closely at the brushwork here and you will see magic. The way Casas blends the shrubery near the windmill against that cool, moody sky, and the man standing by the gate...this is dream-like. In sharp contrast he paints the woman seated at the table in neat, clean strokes and pale skin tones with that deceptively grey-white tablecloth. Even the bottles and glasses are of perfect temperature. The grass below them is an indistinct haze of soft, grey greens that somehow defies description and works beautifully. The tree off to the left, in vigorous strokes of dark grey against that sky adds so much to this composition. Casas paints edges in a way I have never seen before, and it is utterly brilliant. 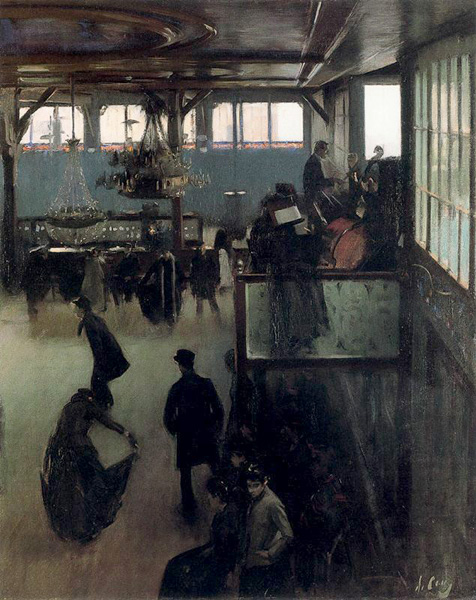 This is a theme that was most notably painted by Renoir in 1876 with the same title, but painted outdoors. In contrast to the lively and cheery atmosphere of Renoir, Casas paints a dimly-lit interior from an unusually high viewpoint looking down onto a dance floor. We can make out a small orchestra playing in a balcony off to the right. Love the bright reflections on the ceiling of that rich wood, and the large glass window off to the right while the far central windows are filled with a white hazy light. Even with unidentifiable figures, Casas uses keen body language to convey the mood of a few partiers of a celebration that may or may not become more lively as the night wears on. Again, that indistinct haze of the floor and its combination of hues. Casas is all about presence, even without a subject or focal point, and he succeeds in ways that hypnotize us.

Pure fun. Pure brushwork and colours with a natural pose. Not very many painters would have envisioned a woman in blue against green pillows and sofa, but it works so well. And that yellow notebook in her hand is a clever accent. I love her fiery auburn hair. And that beautiful pale skin tone. Casas has so much to teach us, defying conventions in ways that make us rethink what realism and naturalism can be.

One of Casas' many posters he designed from the painting above that reveal an ability to reinterpret art as advertising using nothing but pastel. The title translates as Skin and Feather. 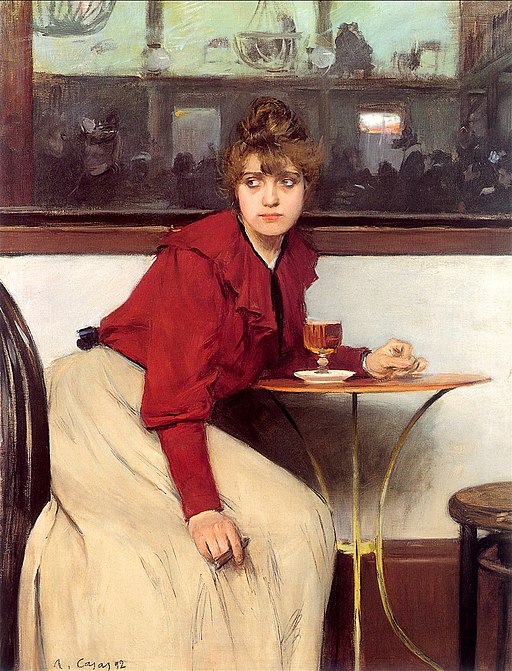 I love how the pencil lines of her dress have been added atop of the paintstrokes. A beautiful woman with cigar in hand, sitting at a table of the very same Moulin de la Galette that appears hazily behind her and yet here Casas shows us his brilliance as a portraitist. The intensity in her face is entralling. And that creamy grey wall behind her with the shadow underneath the table appears effortless. Even the highlights of the wood off to the far left are flawless temperature scumbled strokes. Casas seems to remind artists here that a portrait is more than just a person, but a state of mind...a moment, a place.

Casas painted a series of faceless nudes with these uniquely pale skin tones more to convey a sense of mood than of actual anatomy practice. I love the blues and greys in her hair. The pose is somehow sensual and yet, in its contortion lonely and vulnerable. The guitar off to the left adds a dubious context to this study but mysterious and intriguing also. Again that hazy floor. The way he uses grey in the tones of the floor help to achieve the mystery and it absolutely works. 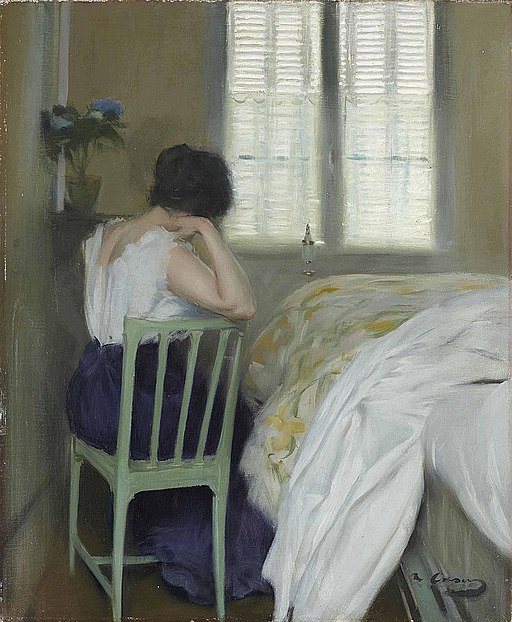 A more melancholy piece than his usual repetorie, yet it still reveals Casas' effortless brushwork. I love how the grey-green tones of the walls have been tinted slightly to give atmosphere and a glow from the dim window light. The brushwork in the comforter on the bed, with those yellows and greens, is absolute poetry. especially as it is highlighted near the window. Her skin tones are more vivid and echoe the greens of the room. Casas uses a vibrant, warm blue skirt to add visual interest to this otherwise monotone scene. Casas seems to make his compositions almost claustrophobic to heighten the visual drama contained within the scene and yet here, this mysterious sadness is also tranquil and by the way the bed is positioned toward the window, it somehow offers hope. Those shutters, the way he blends them on the bottom, is pure delight.

Casas' favourite model and future wife, Júlia Peraire. I love the lack of formality here, completely natural and her expression sullen, Casas livens up the study with a bold yellow dress full of green undertones. Look at those buttery brush strokes painted with a thick, flat brush. The background is merely a glaze of a dark red, possibly alizarin crimson, with a few dark accents of green to break up the transparency. Casas is clearly anti-Classical in his approach to portraiture yet the mechanisms he utilizes here have a Baroque fire within. There seems to be no hesitation whatsoever in his brushstrokes. Pure rebellion.

This is a public execution that took place in 1893 in Barcelona. Casas depicts a very large crowd as a sea of hats in the foreground yet in the distance a blurred series of shapes. The brushwork here is very deliberate and quick, pastel-like in the highlights, yet the distant buildings have the mood and presence of a scene from a film. Even the sky above has the haze of chimney smoke and a bleak, overcast sky to underline this grim event. The buildings have a bare minimum of color and it works so well here. The Cofrades de la Sangre (the Confraternity of the Blood of Christ) depicted in creepy dark, pointed hoods oversee the grim execution with their backs to the audience. Casas diminishes the actual condemned man and instead makes the entire scene a spectacle in itself...something that proves human nature will never change.

Below are a small sample of his charcoal drawings, including a very young Pablo Picasso on the third one: 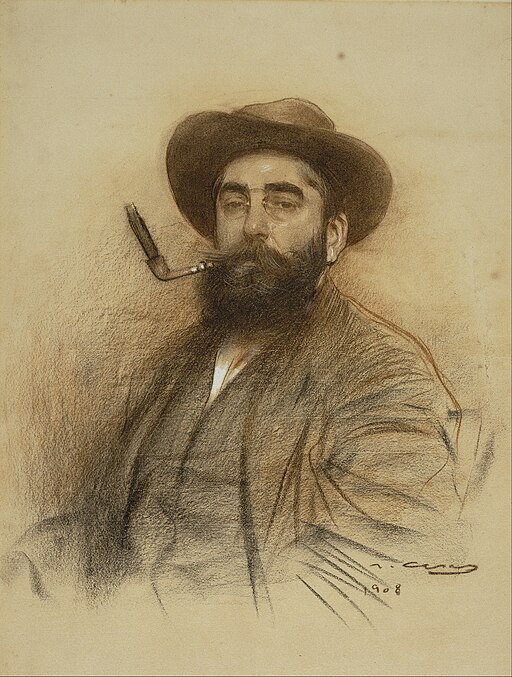 Here Casas takes a very popular religious celebration and reinterprets the spectacle as lively and about being seen by each other, yet uses vibrant color notes and a sense of depth to convey the vast crowd. What is brilliant here is that anywhere you zoom in on in this scene there is a lesson in painting. The faces are all indistinct yet there is a definite sense of individuals in celebration of this holy day. Look at how he painted some of the central figures holding large glowing candles and you get an appreciation of how astute Casas' eye could perceive details without depicting them: 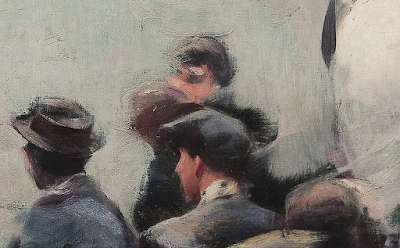 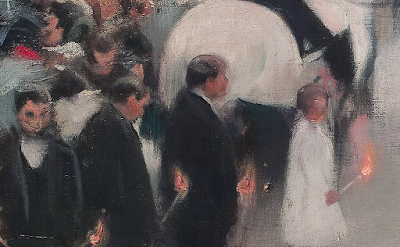 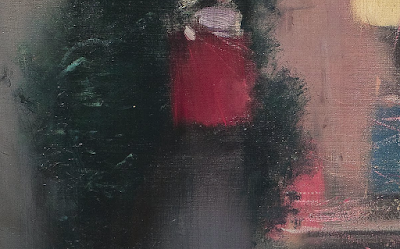 Casas had a facility with his brush that deserves far more attention than many other Spanish artists. Casas was a poet who, like Rusiñol, captured their world with elegance and grace that would be overshadowed decades later by Cubism and other movements. Casas is timeless in that his work remains fresh, beautiful and without ego but full of personality. And genius.