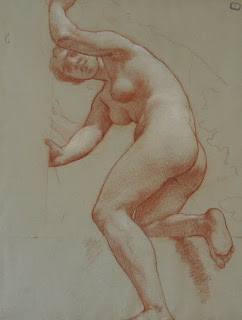 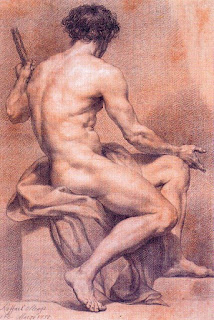 One of several Academic nude studies by Mengs, this study demonstrates the high level of draftsmanship during the Rococo. A seated pose, Mengs incorporates a dynamic pose with detailed musculature and drapery with an intricate hatching pattern behind the figure. What is unusual about the pose is the subject turning away from the viewer, in that normally the figure's face would be in profile or looking downcast, but here it draws attention to the taut muscles of the forearm, midsection and thighs. Interestingly, this pose would work from several different angles. Poses such as this would have been held by the model for several hours, often repeated for up to a week. It is difficult to know with certainty where art models were found, but assuming by their physical fitness these were either men from the military or the lower classes who worked in heavy labor. 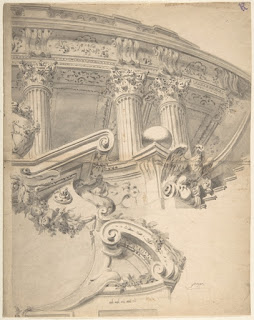 A drawing that appears to be a capriccio from the set of a stage or possibly an architectural idea, this low angle and heavily ornate Rococo design is eye-catching. Done with grey wash over ink. Note the way the light strikes across the columns from the left and the reflected light on the ceiling inside. Click here for a zoomable version. 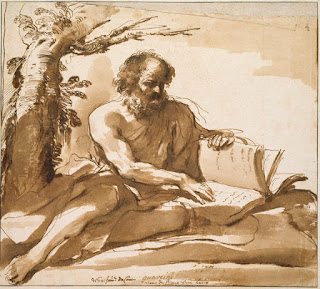 Guercino, St Jerome, seated on the ground at the foot of a tree, turning the leaves of a large volume,1624


Guercino's facility with pen and ink wash is poetic, and takes on another life from his deeply visceral and sculptural paintings. Yet even here, with a simple indication of shadow and light, he still defines the form in a distinct setting that lets our eye fill in the blanks. 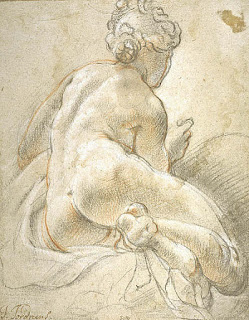 One of my favourite studies, Jordaens was one of the right hand men of Rubens and a poet of the brush in his own right. Note the undulating forms of this figure with accurate attention to anatomy. Studies such as this are a reminder of how the camera has taken away our ability to see the form and remember it clearly... 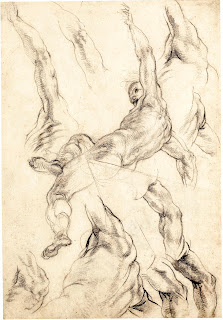 A lesser-known Mannerist painter, Giovanni Alberti here reveals a study of the position of an arm in this seated figure. Note how he tries to understand the balance and structure of the arm, but also how it sits into the joints. Alberti notes how the latimus dorsi and pectoralis muscles raise upward with the arm, and conversely when the supporting arm is bent the cubital fossa of the supinator and flexor muscles are compressed. Another dynamic pose from an era that pushed the limits of figure posing. 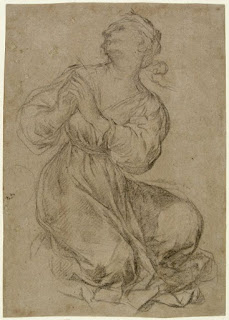 Cortona breathes life into the simplest drawing with pure poetry and expressiveness. The intent or emotion of the figure is always determined before the pose is created, and here Cortona indicates drapery with quick hatching, the essence of a quick sketch. 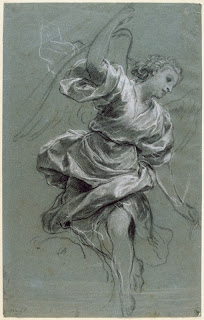 A master of black chalk and white on a dark background, Boullogne's figures have a grace and anatomical structure that is mesmerizing. This study for an angel is more whimsical than his typical nude studies, emphasizing the drapery over the anatomy for the first time. Judging by the lack of details in the limbs this most likely was drawn right from his imagination, but the drapery could have been arranged on a type of mannekin for reference. Note how Boullogne's arrangement is sculptural and dynamic, the movement seems to spiral upward off the page. 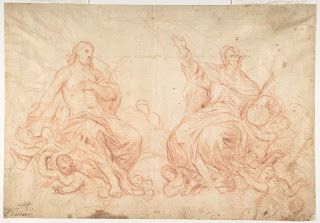 This kind of sketch is worth its weight in gold for the information it provides us about how artists of the past thought. Again, this was drawn from imagination with a solid understanding of anatomy and drapery through years of experience. The composition has to balance two equally important figures without appearing overly symmetrical and uses the glow of a dove to represent the Holy Spirit. The arrangement is triangular without appearing contrived or obvious, and Giordano uses arm positioning to lead our eye around the figures to the Holy Spirit behind them. Note how even facial expression is indicated with the barest of line.