Millet, Poet of the Peasants 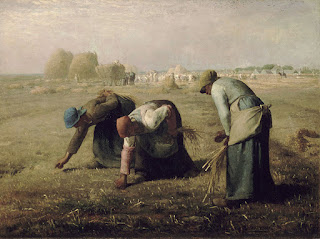 The icon of Barbizon and Naturalism (see my post on Breton), Jean-François Millet was born October 4, 1814 in Northwestern France. Millet represents a triumph of political as well as artistic achievement in that he was among the very first to depict rural society with dignity and sympathy in their social rank, which was quite low. After the French Revolution society began to modernize and the rise of the middle-classes was a success in sharp contrast to the crushing poverty under the monarchy, and it seemed that society wanted to ignore their rural origins. Millet noticed how factories had changed the landscape of France and how less people lived in the countryside, leaving hard working peasants to toil in their fields.

In The Gleaners, Millet depicts peasant women gleaning the last traces of a wheat harvest, faces downcast, and the meager remains are a scathing commentary on the poverty of the lower classes. In the distant background we see massive piles of wheat and workers busy organzing, while a landowner to the far right watches on his horse. Note Millet's thick brushstrokes of wheat in the foreground. When this painting debuted Millet was harshly criticized by the middle-class as well as the wealthy.

Painted for his friend Félix-Bienaimé Feuardent, Millet depicts the wife of Félix after their marriage, prominently displaying her wedding band on her finger. Inspired by Frans Hals, Millet creates a sober portrait against a dimly-lit background with a dark costume and ornate collar. Millet adds a twist, quite literally here, by arranging Louise in a near-profile, with head slightly inclined forward. Her character here is both silent and strong, disciplined yet lurking a sensual quality. The catchlights in her eyes complete the portrait and add life to her youthful face. Millet here displays an astute sense of people and character.

Romantic and sensual, this breathtaking scene requires no explanation and yet is teeming with mystery and awe. Note the clouds in the distance. This humble building glows with the light of the sun, the green grass leading the eye to the trees off in the distant left. Here we can already see the beginnings of Impressionism. This is absolute poetry.

A Classical study paying tribute to an academic tradition, here Millet arranges his model in a sensual and dynamic pose indeed worthy of study. The impatient strokes of the background suggest this was painted very quickly from life, and the identity of the model is unknown. Millet's warm skin tones, including the deep pinks and faint traces of blue above her buttocks show a knowledge of color and tone that is striking for such an impromptu study. The highlights are painted thick yet with just the right amount of warmth, and the blue of the drapery she sits on adds warmth to her skin.

Originally title Prayer for the Potato Crop, Millet shows a modest couple silhouetted against a dramatic sunset in deep prayer. Note the stark emptiness of the landscape. The mood of this piece bears strong resemblance to Jules Breton, and I'm not sure how well acquainted they were or who inspired whom. The wild colors of the background sky, including reds and greens that fade into a grey towards the horizon, suggest an uncertain future for both of these young farmers.

Farmer Inserting a Graft on a Tree, 1865

Despite the simplicity of this painting, there is a lot at work here. Millet experiments with vibrant colors to highlight his main figures, using a softer pink on the woman to indicate her social status while holding their baby. The muted grey blue of the home behind them is in atmospheric perspective. What is interesting is the composition at work here: the man is on the left and is surrounded by his tools and his work, while the woman is swathing herself and her baby with the harvest in the background behind her and a tree rising up behind her to suggest growth and fruition. The tone of this painting is decidedly more optimistic than his other work, perhaps showing that hard work and ingenuity is more important than privilege.

This hauntingly beautiful painting depicts a lovely peasant woman lowering her heel into a breathtaking stream. Millet takes a familiar subject of idealized youth and beauty and creates his own spin by making her poor and ignored by the world, lost in her own world, with no hope of a nobleman to take her away from a life of hard work. Swans are a symbol of wealth and prestige, yet here they are shown literally as animals swimming on the stream. Millet's palette is a complex mixture of warms and greens with distinct pools of light in the distance and shining on her side and arm. It is a work that is both sad and highly sensual at the same time, revealing a mind that revered nature and a profound respect for women and the lower-classes.