Domenico Zampieri was born October 21, 1581 in Bologna. A student of the Accademia degli Incamminati he would work in Rome with Annibale Carracci in Rome on the Farnese frescoes. His career would be defined by his work with not only paintings but ceilings and frescoes. Nicknamed Domenichino for his short height, he was also known as Il Bue (the ox) for his stubbornness and disciplined work methods. Although not a well-known figure in the Baroque it is his use of color and the way he painted women in particular that makes Domenichino unique. His rivalry with former collegue Giovanni Lanfranco would greatly upset him over the years, eventually bringing him to work in Naples where he could work without needless comparison to him.

The Persian Sybil demonstrates his particular genius for painting women. Draped in vivid blue and red with traces of yellow, Domenichino's effortless grace and strong face of this lovely woman is mesmerizing. Note the muted highlights on the drapery. The headdress is striking also. Domenichino gives us a contemporary portrait of the Italian woman in his day, real and idealized at the same time, strong yet very feminine. 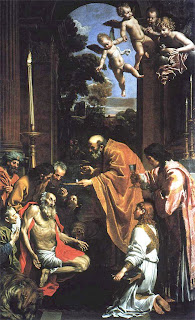 This poignant Baroque painting, arranged in a very tight vertical composition, depicts the last communion of St. Jerome from Saint Ephrem. Kissing the hand of St. Jerome is Saint Paula of Rome, who helped him translate the Bible from Hebrew and Greek into Latin as she was well-versed in Hebrew. Considered a masterpiece in its time, rivalled only by Raphael's Transfiguration, Domenichino uses not only chiaroscuro but vibrant color and dramatic facial expressions. Note the influence of Da Vinci in the delicate rendering of the angels above. 
Domenichino portrays the saint of young girls and chastity with a luxurious grace and dignity not normally bestowed upon a saint. Her drapery has such an ornate fringing and her color palette of warm colors is intriguing. Domenichino's architectural setting helps frame the subject and gives a warmth to the painting. The urn to her left is especially striking. Note the foreshortened angel that crowns her.

Taking direct inspiration from Michelangelo's Creation of Adam, he creates the theme of God and his angels as Divine Brain or Intelligence, staring down towards the innocence of Eve and Adam who shrugs toward his female counterpart. Note the headless angels floating near God. This painting has a comical, cartoony quality to it, as if the story in Genesis was apocryphal even in the time of Domenichino. It is hard to believe that this is the very same painter of the above examples, and I am not sure at all who commissioned this or why it was painted in this way. It is interesting, though.

A distinguished portrait that shows what Domenichino could do with a limited palette and an elegant pose. Some believe this might be a self-portrait of Domenichino in his early twenties, but here this young man is tall and has no indication of being an artist. It is a portrait about confidence and self-assuredness. 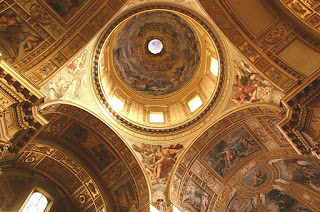 
Domenichino is another painter that is difficult to define because of his varied styles and approaches to his subjects much like Luca Giordano, but his talents were evident and showcase an artist who made the mundane appear more beautiful and made women as important as men in portraiture.