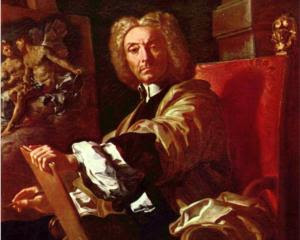 Born near Avellino on October 4, 1657, Francesco Solimena was a giant of the Baroque, both painter and architect, who made Naples his home in his early twenties. His figures seem to have a musicality to them, his compositions inspiring, and his sense of color and chiaroscuro is majestic. The fact that he was not a northerner like his contemporaries makes him also unique, and he helped to establish Naples at that time as one of the painting capitals of the world. His career was quite successful and his studio also became an academy for several artists including Francesco De Mura and Gaspare Traversi.

His Self-Portrait above shows a man of confidence and stature, someone who took his craft seriously and enjoyed the discipline of his hard work. Sitting in a rather noble red chair, Solimena is showing us that artists need not feel any shame in who they are or whom they work for, that artists contribute much to society and can be well-rewarded for their craft, as was the case for Solimena. 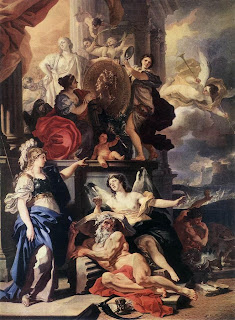 In Allegory of Reign, immediately one can sense his instinct for figure arrangement and body language. Vertical compositions can be among the most difficult to arrange, yet here Solimena develops flawless grace by leaning his figures against a facade in one-point perspective. The placement of color is also brilliant here. Note how Solimena's reds and blacks flow in a circular motion, while the figure to the left stops our attention with her vivid blue and white, yet she points back to the central figures. Father Time lays languidly against a half column, his scythe on the floor beneath him while he holds up a book on his head for an angel to read behind him. Solimena portrays him as listless and inconsequential while creating a superb nude of sculptural calibre. Up above they hold giant medallion of Catherine II with references to greatness and vanity. Solimena uses triangular arrangement of theses figures to produce an innate harmony within this tight structure. The dark grey skies add drama to the scene. A curious depiction of St. John the Baptist, Solimena creates more of a portrait than a saint, as if we know him...youthful and handsome as opposed to bearded and long-haired. Solimena uses red drapery to frame him, while the placement of his arms directs our eye away from the red towards the coming of Christ by what he is holding and his hand pointing towards the heavens. Note the lamb hidden in the shadows. Solimena turns a stoic figure from the Bible into an allegory of something wonderful that is coming, while at the same time creating a captivating portrait. Here Solimena creates a stage-like arrangement of figures on two separate planes using complex foreshortening and perspective. To say there is a lot going on here would be pure understatement. And yet Solimena has devised solid order to this seeming chaos. Note how both the camels and rider on the right along with the rider on horse in the foreground form a triangle with the man in red and black drapery on the steps. Above them the figures preparing Rebecca for leaving are arranged in ascension like a right-angle triangle. Solimena's use of color here again is amazing, highlighting key figures with red, while others blue, and neutral characters in a greenish yellow. Every single figure in this painting is physically doing something in this composition and looking in a particular direction. The gated arch under the above figures helps to separate and balance the composition.

The Abduction of Orithyia, ca.1730

Solimena's genius for chaos once again generates a very busy composition that looks effortless. Based on a lost play by Aeschylus, Orithyia was a princess of Athens who was abducted by the north wind, Boreaus by being wrapped in a cloud and taken by force. Apparently she herself would become a goddess of the mountain winds. Note the figure trying to pull her away from Boreaus. While the depiction of a cloud here looks more like a giant, puffy whale it is the figures that make this painting in that they seem to explode in all directions. Note the beautiful anatomy of Boreaus and Orithyia. Solimena takes a very abstract story and turns it into drama worthy of a play.

Here the chiaroscuro of Solimena comes through with his graceful arrangement of women. Note how he forms a sense of space by surrounding Bathsheba with her helpers and uses a strong shadows and light to define each character. The contrast of kneeling versus standing adds visual interest to the composition and helps to tell the story. The influence of Venetian color is definitely apparent here, yet Solimena makes it his own also. His effortless use of reds and yellows—warm colors that can easily clash when placed close together—are harmonized with cool blues. Solimena also varies the temperature of greens and yellows to add visual interest. This painting appears to be an oil sketch, and helpful in how Solimena paints. Note the scumbling of blue on top of the red in Mary's robe. In fact, he uses red as a base in all the main figure's robes, then scumbles color on top. The cherubs all have unique faces, almost adult-like, which reveals his attention to details and storytelling. By placing figures in chiaroscuro, in and out of light, he creates a visual musicality, a rhythm that along with gracefulness and foreshortening is brilliant. Note the cool greenish hues of the cloud with God while the angel's cloud is painted in cool greys with warm accents. Once again a vertical composition that Solimena effortlessly weaves together, as all of his art. Solimena is a rare breed of gem that needs to be observed carefully, for his art has plenty to teach us.