Born on January 27, 1679 in Paris, Jean François de Troy was a French Rococo painter and tapestry designer who is known also from his teacher and father, François de Troy. A highly sensual painter with a striking palette, deep shadows and a natural penchant for group compositions, Troy pushed the limits of his Classicism to a quest for the candid. Although poetic and graceful, his figures are neither quite as affected as they may appear at first glance. The way in which he pays equal attention to the posing, anatomy and significance of both male and females reveals a pronounced Italian influence, both sculptural and illustrative, from his seven years there.

In Pan and Syrinx above—a subject that has been interpreted by countless artists— Troy depicts the moment that the fleeing Syrinx awaits advice from her river nymph sisters while horny Pan chases her from behind, clutching the water reeds that she will eventually turn into. What is unusual about this version is how Syrinx is in the arms of Silenus. Troy contrasts warm fleshtones against a verdant landscape in perspective, while the foliage surrounding the figures are warm also. Pan is portrayed as youthful and handsome as opposed to the ogre-like manner he typically represents, and Syrinx here appears to be reaching out for him unaware of her fate. Sexual innuendo is humourously indicated by the long reeds that hide Pan's groin and the metaphor that she changes into reeds becoming a musical instrument of pan pipes, an instrument that you blow into...the oral sex joke is not lost here, and reveals Troy's clever sense of humour. Compare with this clumsy version by Poussin. 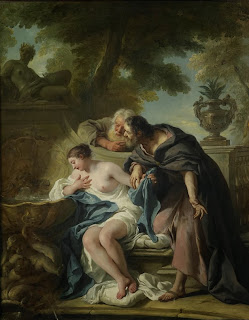 Another often represented theme in art, Troy's version is tenderly lit against a background canopy of trees with very Classical figures. There is a real sense of fear in her downcast face at the well, and the persuasive physical manipulation in the way the man gently holds her arm open to reveal her breast. What is also interesting is the uniquely muted dull tones of the robes in this man, as if to suggest his predictable nature. Troy's use of hands and feet to help narrate the story shows his incredible knack for body language, a talent that many others used in this theme as I wrote about in Batoni's version. Now compare Troy's version with the disgust of Artemesia's, the coquettish version by Belgian artist Santerre, and this violated version by Honthorst.

This is textbook Rococo aristocratic pomp, yet Troy's seemingly effortless detail in the rich fabrics against the architecture and fuzzy verdant background illustrates his ability to switch gears and humour the upper class. Again, the body language of the man leaning toward the young woman offering her a small bouquet of flowers, the distinct use of hands and facial expression all serve to tell a story in one image or "frame". The attention to clothing and physical stature against the elegant perspective of stairs leading up to a couple holding hands suggests a relationship governed more by status by upward mobility and wealth than actual love. 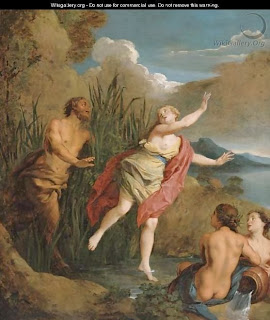 In this alternate version by Troy, Syrinx is notably afraid and this time he is the more ogre-like satyr, with an unusual drapery around his waist. The stiffness of the foreground nymphs suggests this may be the work of Troy's workshop rather than completely by his own hand, especially in the simplistic background and unimaginative overall composition. However, the landscape and figures still maintain a Classical beauty and the sculptural quality of Syrinx is striking. 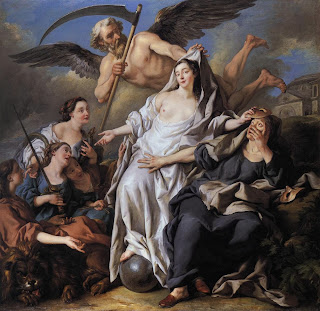 An Allegory of Time Unveiling Truth, 1733

One of Troy's more famous paintings, this entire composition has a comical sensibility, especially in the way time himself is suspended in mid-air propping up truth by the top of her robe. Troy is mocking the very concept of the painting itself. Note how the women bunched up to the left gaze reverently at Truth and the elderly woman she has unmasked, while another mask seems to look up at her. Truth herself is looking directly at us while gesturing to the women beside her as if to show us their gullibility. The symbols they are holding, such as the sword and lion represent power and ambition while the serpent is deception and the intellect. Troy here suggests that all vain acts of humanity are a performance in themselves and that the only reality is age and death, ultimately. Technically, the painting has a sense of dark colors that are wonderfully painted in contrast to the shimmering satin glow of truth's drapery...note the traces of yellow in the shadows of those grey tones. A gorgeous painting that marries Baroque Classicism with the Rococo, Troy creates a scene of all-female figures, each one a painting in themselves. Actaeon has turned into a stag for oogling at the nude Diana and runs off into the woods where he will meet a grisly fate of being devoured by his hounds. Here however, Diana is a powerful woman, wearing the skins of a beast with her arrows conveniently behind her. She probably could have taken him on with her bare hands. Troy's use of alternating directions for the figures along with superb warm and cool colors, with the figures sitting atop of a sloping rock formation adds a depth and realism to this otherwise surreal fantasy mythological scene. 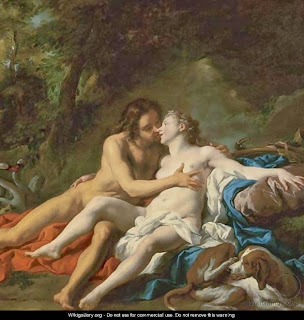 This piece is a highly erotic painting even by Rococo standards. He uses the device of Venus and Adonis to reveal two lovers frolicking in the woods, and yet under his brush the scene appears natural and poetic. Not even Boucher, who made a career of painting sensual nude women would have attempted a scene quite like this and got away with it. The date and background of this painting is fuzzy but there is some information here at Christies where it is for sale. The frankness of their lust indicates the turning away from mythology and religion to a more life-like scene that, for better or worse, was not embraced by any art movement and for such reason paved the way for pornography in the modern age. Here, in this timeless moment under the guise of mythology Troy has gracefully opened the door to a possible visual poetic erotica that never happened, and never will. Troy was a French master ahead of his time, and vastly underrated.