The Interrupted Pilgrimage (The Sick Pilgrim), 1858

Born on January 15, 1793 in Vienna, Austria, Ferdinand Georg Waldmüller was a 19th century painter from the Biedermeier period. One of Austria's most well-known artists in his day, sadly today he is quite obscure but his incredible talent for detail and beautiful colors make him particularly unique from most of the artists I've written about here. It seems like many artists, especially today, fall into either landscape or figures, but not both. Waldmüller wielded both with a musical ease...his use of sunlight is among the most natural and vibrant I can ever remember any artist ever painting. Looking at Waldmüller's work one feels a deep optimism and overall gratifying peacefulness, without the sentimentality that often accompanies art from this era. He has an epic sensibility yet embraces common people instead of heroes and religious figures of the past, a natural storyteller that includes women and children as key characters in his stage.

In The Interrupted Pilgrimage above, a family of peasants nestle atop a rocky hillside as one of their members is tended to for whatever reason—hardly the kind of subject that makes us want to run out and paint. Yet Waldmüller creates a moment so lifelike, with natural sunlight spilling atop of these villagers and the strong shadow in the foreground, that it actually creates a kind of déjà vu. It is foreign and familiar at the same time. The composition is also interesting in how the figures recede into perspective along a sloped diagonal plane, using vibrant cool/warm colors to string our eye along the figures to keep from wandering immediately outward toward the scenic hilltop view. A young man holds up a crucifix figure to indicate the pilgrimage is a religious one, possibly related to Easter. Waldmüller uses texture and color to imbue this scene with an earthiness that is almost tangible, so much that one can feel the afternoon breeze of the high altitude, yet the psychology of this simple scene makes us ponder whether the sick relative is going to be ok for the long trek. A fascinating study and a deeply personal painting, this story is the kind that makes the most memorable kind of art. This landscape is a view from a region just below Vienna with a rich history dating before Charlemagne. A fertile area known for its grapes, it was apparently well known to Beethoven, a contemporary of Waldmüller who ended up painting his portrait in 1823. Waldmüller takes a simple hilltop view and creates a poetry of warm sunshine with an inviting geography of greens and warms. It is clear that Austrians loved and respected nature, letting it inspire them both visually and musically, and here Waldmüller forces us to rethink a humble hillside and savour the quiet richness of the moment. Off to the right he places a beautiful young woman sitting along the rocks to reinforce the importance of and pleasure from nature and solitude. Today this region is known for having one of Europe's largest shopping centers, a crass intrusion into a quiet corner of Austria that, by looking here, clearly did not need it. Waldmüller's moment in time here is a gentle reminder of what is truly important to our wellbeing and how we belong to nature. Portraiture was also one of Waldmüller's genres, and as we can see here in this portrait of a university professor, he was no slouch in this field. Although the furniture and drapery have a stiffness to them that seems rushed and even unfinished (the chair seat), Waldmüller was able to capture the presence of this man with a sense of importance to his stature. The professor holds his gaze evenly, and his hands suggest a man of intelligence and humbleness. Note the NeoClassical hairstyle. Even though the lack of detail in the clothing appears unrefined Waldmüller scumbles a dark cool greyish purple on the folds of the shirt, which is fine from a distance. The background in the upper right is an interesting green scumbled atop what appears to be a yellow ochre while to the right it becomes a smooth light brown tone, which shows distinct cracking over time. 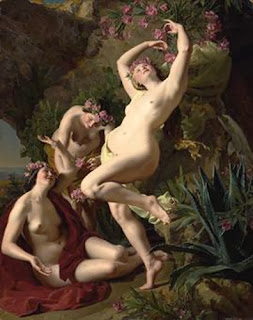 This charming, whimsical piece seems totally out of character for Waldmüller, and was most likely commissioned from an esteemed client. Curiously enough, Waldmüller approaches a very Classical subject with a modern sexiness that would have made Botticelli fall out of his chair to gawk. Waldmüller is ridiculing the very concept of youth, beauty and elegance, (Thalia, Euphrosyne and Aglaia respectively) the three daughters of Zeus, as more like frivolous eyecandy fauning over roses. Interestingly, Waldmüller manages to squeeze in his love of nature with vibrant foliage and a massive rock for them to lay beside. Note the use of arms to indicate body language and sexuality.

Like a scene from Mary Poppins, the spontaneity and naturalness of the scene suggests Waldmüller had use of a camera by this time in his career. What I like about this particular painting is how there are three distinct activities occurring: the old man to the left gazing nowhere in particular with the young girl rubbing her eye, the central figures of young girls in white, and the young boy off to the right looking back at the three young children. Despite this seeming lack of focus it works because we intrinsically understand the varieties of activity that children engage in. Waldmüller frames this all in a corner perspective of arched walls with lush trees and that trademark sunshine.

Waldmüller's masterpiece in terms of group composition. The endless variety of facial expressions and personalities, beautifully lit and in one point perspective, this is one of those paintings that needs to be seen in person. Note the little boy in the center with his hands folded in prayer, and above him at the vanishing point of the perspective is a cross on the wall. Waldmüller's bright sunshine is replaced with a Baroque chiaroscuro that has the feel of a Dickens novel. It is clear also that in addition to nature Waldmüller loved children, too.

I love these kind of paintings also. A very French theme of secret love and curiosity, Waldmüller uses his genius for light and shadows in a Norman Rockwell type of simplicity that anyone can understand merely by looking at it. Note how the use of red symbolizes lust and how the young woman is dressed similarly to the old woman hiding behind the door, except the old woman only has red wrapped around her head to signify her lusty imagination.

A stunning vision in muted tones. This is one of those paintings where the mood of the piece becomes a poetry that words cannot begin to describe. Waldmüller wants us to experience it the way he does. Note the two children, tiny figures off to the right, completely alone in this absolutely serene and gorgeous setting with long shadows on the grass in later afternoon in Prater park, Vienna. In today's world there are amusement rides and a train, but here, in Waldmüller's world, it is a silent sanctuary. Waldmüller's influence on landscape art and in particular en plein air painting would have an effect on the Impressionists not far after his death in 1865. What Waldmüller was able to achieve, in the range that he expressed himself in, is one of the truly rare species of great underrated artists. His subject matter may have been simplistic, but his art was anything but that.