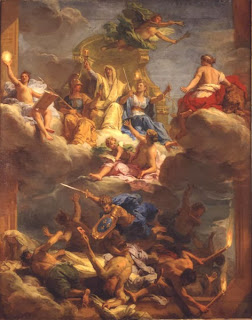 
Born on May 1, 1644, Jean-Baptiste Jouvenet was a French Baroque painter from Rouen, France. At the age of 17 he moved to Paris where he worked under the legendary Charles Le Brun at Versailles for King Louis XIV. Jouvenet is one of those rare painters who was able to synthesize color with light and dark effortlessly, while also having a keen eye for composition with groups of figures. In 1713, at the age of 69, he had a stroke which left his right hand paralyzed, a horrible setback for any artist but led Jouvenet to surmount his frustration and began painting with his left hand. His last two paintings were done with his left hand before his death in 1717. This heroic and dramatic spirit is a hallmark of his painting, a master in the shadows of French Baroque art whose work deserves to be reexamined and appreciated.

In Le Triomphe de la Justice Jouvenet's figure arrangement is seamlessly blended with dramatic color, chiaroscuro and dynamic body language. Note how the figures below fight ruthlessly against a dark sky while above Lady Justice holds a sword and scale, yet is not blindfolded as was depicted in many sculptures. The remaining figures (except for the angel above them) are painted in a warm palette and drapery against a slightly less dark sky, while the figures below are in vivid cool drapery. You can see how the composition has a distinct geometric harmony: 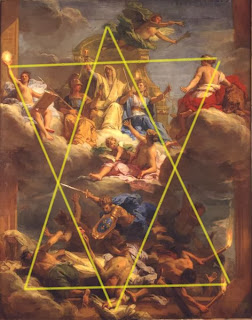 An often painted scene from the New Testament, Jouvenet places Christ off to the right with the strong line of standing figures behind him, while in the foreground he creates a scene of such drama and poetry that eventually leads the eye to the newly resurrected Lazarus to the far lower left of the composition, under a cave. Beside Christ stands Mary, the sister of Lazarus, glowing in white and yellow while presumably Martha is beside her touching Christ's blue robe. On another level, this painting illustrates the transformation of the Baroque itself from the tenebrism of Caravaggio to the Classical grace and anatomy of the late Baroque where color and figure arrangement reached its apex, moving away from the pious depiction of Christ as the key element of the painting to more secular themes. 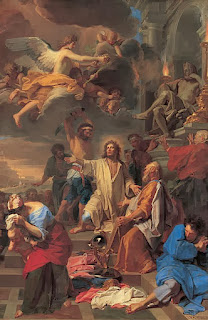 Here Jouvenet takes an awkward vertical composition and breathes life into it by his figure placement. Note again the strong triangle enclosing the four foreground figures and Saint Ovid. His body language leaves no doubt to the meaning of every figure portrayed here. Jouvenet depicts the moment where Ovid is about to be martyred for being a Christian, stripped of his Bishop clothing, while above him an angel offers a crown to what appears to be a statue of a Roman god. The storytelling ability of this painter is such that he can create a scene complete with a cast of characters in a way that unfolds like a play, something not every painter was quite capable of. 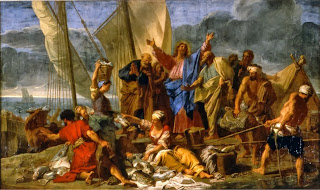 The miraculous catch, as it is translated in English, is one of the key miracles of the New Testament which leads the way for the apostles to their destiny as "fishers of men". And although Christ is more centrally placed here, his physical presence is not the most important element of the story. Jouvenet's genius for physicality and leading the eye to the periphery of the frame is his unique trademark. Another scene depicted by great artists such as Rubens, here Jouvenet places us right in the middle of the action as if right on the boat with them, emphasizing the figures and fish against a dramatic sky instead of the vast sea. 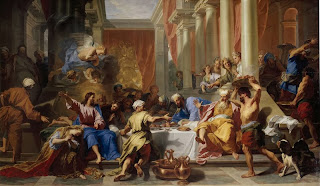 I had the pleasure of seeing this massive painting in person over a month ago at the wondrous Musee de Beaux-Arts in Lyon. Massive is not an adequate word, either. Measuring 393x663cm, each one of these figures is life-size. Once again Christ is not a central figure. A meal at the house of Simon, where a sinner woman washes the feet of Christ and is forgiven of her sins to the amazement of the guests around him. Despite a largely horizontal figure arrangement Jouvenet creates depth of space by the use of columns in perspective behind them, adding visual interest with light and shadow intertwining among the characters from left to right. Jouvenet's use of color and anatomy here are of his finest yet. Up close, I remember the deep transparent shadows in both the skintones and the drapery. The figure up above in green against the second column to the right pointing is possibly a self-portrait of Jouvenet himself. Note how the central figure is the man in green drapery kneeling away from Christ...I remember studying that figure and noting the thick highlights on the feet. It is a symphonic masterpiece, this beautiful painting.

Below is a photo I took with my iPod Touch to show its placement in the room. Note how low to the floor it is, allowing for close inspection, which seems to be in sharp contrast with the Louvre which tends to place their large paintings high above, stacked one above another. You can also make out beside it Les Marchands Chassés du Temple and Rubens' Saint Dominic anf saint Francis protecting the world from Jesus'wrath. 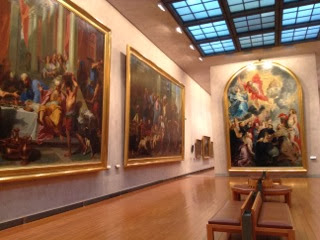