Yesterday was the birthday of Spain's greatest painter, Diego Velázquez, the man who inspired the awe of several painters from his own era right up to the modern day including Manet, who referred to him as the "painter of painters". And justly so. It is hard to overestimate the influence of Velázquez as portraitist and allegorical painter. Everyone from art critics to philosophers have written about him; his Las Meninas changed art and painting in a way that still ripples deeply today, and it's meaning is not entirely certain. Having been born in the same year as Anthony Van Dyck, Velázquez lived a full nineteen years longer and unlike Van Dyck who painted the aristocracy exclusively, Velázquez painted everyone from King Philip's court including dwarfs, court fools, giants, dancing bears, and gypsies.

In his self-portrait above we see a man with full confidence. What makes Velázquez so unique is how he varies his brushwork in such a way that realism belongs in the most important details, mainly the face, and that the background is not a room filled with furniture but something abstract, a state of mind in the sitter. Regarding the face, the eyes are the most important element (as Van Dyck painted them) followed by the mouth, yet all this is incomplete without body language. If the sitter does not communicate his state of mind, the portrait is incomplete. No matter how loose or tight the face is rendered. Hands are not posed for effect, but to describe the sitter. Always. Welcome to the world of Velázquez.

The task of finding only a few of the most interesting works of Velázquez to write about is indeed challenging but for the sake of time I will focus on the following:

Although I am not entirely certain of this, Velázquez may have been among the first artists to paint portraits of dwarfs and court fools...the only artist that comes to mind who was fearless in painting unusual subjects was Caravaggio. At any rate, in the above portrait we see a very sympathetic and intelligent depiction of this court bufón. Look only at the face and you see a man who has devoted many years to entertaining the King of Spain. The brushwork is loose but definitely not careless or haphazard—the highlights on the forehead and under the right eye are absolutely flawless. It is meant to be viewed from a distance, yet up close it reveals everything you should know about painting portraits. Note how the hands are curled into fists in his lap. The furrowed brows also seem to register both a resentment and acceptance of his profession, and by painting one eye darker than the other it's easy to accept this as truth. 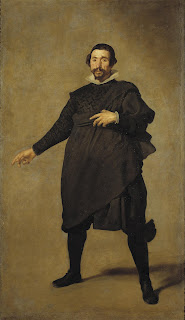 I love this painting because it is remarkably modern. The background appears to be like a backdrop, as in a photograph. Pablo, a famous court jester in his day is depicted here with feet wide apart, and only the shadows of his legs on the floor behind him. It has a kind of fun energy, this pose...one hand holding his garb while the other points away from himself, as if implying his vocation is merely make-believe and entertainment, and yet somehow empty at the same time. Look closely at his face and you will see a vulnerability in those eyes, yet at full-length he appears totally confident. 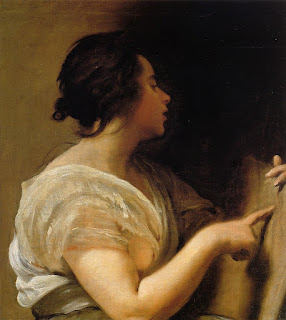 This incredibly natural study of Arachne is captivating and real. Again, Velázquez has a mastery of body language here that tells a tender story about her character, the great weaver who defies Athena. Portrayed here as a simple Spanish peasant woman he makes us sympathize with her, that her fate is cruel and unjustified. The way she looks away off into nowhere makes this painting even more haunting. Velázquez avoids all melodrama. Instead, he makes a real woman out of a myth. 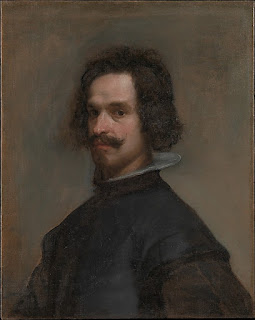 Is this the self-portrait of Velázquez? If not, then who would it be? It certainly looks like him. In the zoomable version on the Metropolitan website, this portrait comes alive. The brushstrokes are breathtaking. With a very simple palette, scumbled tones, and possibly blended with his fingers in some areas, Velázquez has made a portrait that is more powerful than any photograph could ever be. And the highlights on the forehead are an unusual cool grayish-green; it works perfectly. The beard is where we see him blending with his fingers the most. I've lost count how many times I have studied this portrait. Even in it's unfinished state, it is a masterpiece. 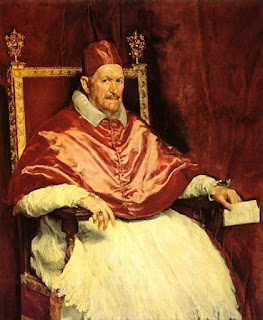 
Finally, I include this last portrait for two reasons: because it is considered one of the greatest portraits of all time, and secondly because I had the pleasure of seeing it in person in Rome at the Doria Pamphilj. Unfortunately, it is very difficult to find an image online that gives it justice. This is due to the fact that in the Doria this painting is in a private room that is light and temperature controlled, and stanchioned off so you can't stand too close to it. In spite of this, I stood in that room for a very long time. In fact, the more I looked at it the more real that scowling face of the pope appeared, glaring back at me. Velázquez makes it even more compelling by painting the chair as loosely as possible, and the robe is brushy yet again with perfect highlights. Velázquez took a very reluctant sitter who disliked Spaniards and captured the most powerful man in Rome better than a thousand biographies ever could. Many painters talk about the soul of the subject, but Velázquez actually achieved it.