In the art world of the Baroque, Rubens' bio reads like the stuff of legend: scholar, art collector, diplomat, polyglot (spoke seven languages), knighted by three kings, independently wealthy and one of the most prolific painters in history. Although he ran an enormous workshop of nearly a hundred artists, his design and finishing touches were on every single piece, and he painted on a scale that even today makes anyone's jaw drop. In fact, Rubens painted so much and often scenes of vast complex figures that it is challenging to pick only a few, not to mention his incredible drawings and studies that often give insight into his techniques. In this post I will attempt to show a sample from one of his various categories.

In the above painting, Rubens has separated the women on the left and the men on the right. The kneeling figure holds the head of Cyrus the Great before Queen Tomyris of Massagetae—he is actually draining the blood into an urn. Notice how her ornate robe in silver and gold underlines the women behind her. The men are adorned in vivid colours, strutting and holding their weapons while the women appear disgusted yet somehow unable to look away. The bearded man in purple who thrusts his pelvis forward may possibly symbolize a sadistic pleasure in war and suffering. At any rate it is easy to see how Rubens was inspired by the operas of his day and using theatrics to convey history and allegory, all with his Michelangelesque anatomy. I first seen this magnificent painting at the London National Gallery when I was 23, and it is one of those masterpieces that continually astounds no matter how many times you look at it. The handling of the paint on Samson's back defies words...I study it often and learn something every time I see it. Judging by the lack of extraneous background objects and flora, and especially in the simple rendering of the guards by the door, I believe this painting to have been painted solely by Rubens hand. Where do I start? The main four characters are arranged in a right-angle triangle, with red, green and blue costumes. Look at the subtle shadow on the left shoulder of the man cutting Samson's hair...it's painted in a dirty greyish blue on top of Rubens' imprimatura. Notice the highlights below the beard and behind his head. Rubens continues this color in the hair of the man, again on top of the underdrawing. The sleeve of Delilah repeats this greyish blue motif in the shadow area, with perfect thick highlights on those flowing folds. Delilah herself has a Sybil-like Sistine Chapel influence, cold and pale, while Samson is a sleeping Classical sculpture. I think Michelangelo would have admired this painting very much, even if recognizing his own influence on Rubens.

Asia, America, Europe and Africa are all represented here as women with the men as the major rivers of those continents. Rich with symbolism, what really strikes me about this painting is the natural body language depicted here: Rubens has a way of making abstract concepts and allegory seem like child's play. I'm curious as to how risque this would have been in its day...the river Nile has an arm around Africa, who looks seductively over her shoulder (gee, what could she be doing with her left hand?? Europe seems to be looking on them with bearded Danube, who holds a rather long object at a certain angle...). On the right are Asia (a white woman??) with an elder but muscular river Ganges, and America in the background with a bearded Rio de la Plata, who seems to be daydreaming. Rubens uses contrast in body language very effectively here. America and Rio are close together with Rio leaning against her. Asia, however, is further apart from Ganges but she leans against him. The drawing of the Nile is quick yet accurate, alive...Rubens had very few equals in drawing. 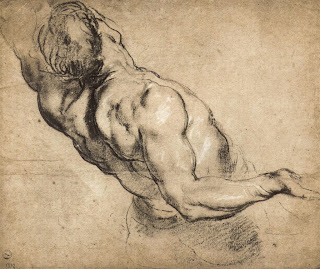 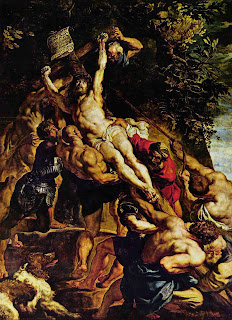 One of my favourite drawings, and a highly dynamic painting, this is all about pure energy and dynamics. A vivid, real portrait that Rubens conjures his subject to life beyond the brushstrokes. Look at the immediacy and presence here. A portrait does not need to be depressing or morose in order to be effective, something that many contemporary artists seem to have no clue about. Rubens knew how to make anything believable, no matter what the subject.