The rebel. Innovator. Realist. Gustave Courbet painted landscapes, portraits, still-lifes, seascapes, and nudes. Born in 1819 on June 10, he was the man who wore many hats and refused to be categorized by any of them. He was among the first to paint rural and poverty scenes in a social and political context, without melodrama or pretense, and more often than not in a plain and "ugly" way, as some critics called him. In the above famous self-portrait, he is smoking marijuana in his pipe, which explains the "fuzzy" look in his eyes; few self-portraits have this much character. 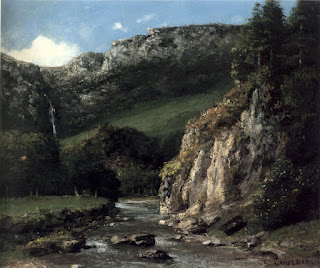 Stream in the Jura Mountains, 1872

In the above painting Courbet uses strong diagonals to contrast with a heavy horizontal middleground. This piece is all about contrast. The color palette here uses cool against warm, and even the textures of this composition contrast jagged rocks against smooth green grass and trees, deep blue sky above against cool grey stream below. It's somehow both ordinary yet inviting at the same time...with the sense of immediacy that a camera might have.

This is a very whimsical nude, breaking free of the Classical constraints that are normally associated with the nude, and in fact seems to make fun of Academic art. The unusual pose is both natural and slightly awkward, as if captured in mid-movement, amused by the parrot on her fingers. The parrot may symbolize gossip, which would completely change the context of the painting to a more sarcastic tone. Clearly, Courbet could have chosen any bird. This appears to reveal a narcissism by her long hair and flowing curtains of her tent. Technically, the way he painted the reflected light on her left foreshortened leg is very convincing.

The Artist's Studio: A Real Allegory of a Seven Year Phase in my Artistic and Moral Life, 1855

This is another one of my favourite paintings. Inspired by Velázquez's Las Meninas, Courbet depicts the subjects of his paintings on the left from various ages and social classes, none of whom are looking at Courbet except for the priest. The guitar lying on the floor may symbolize letting go of a possible music career for his art. As Courbet paints his landscape a young boy looks up in wonderment, and an Academic nude woman stands behind him, with a playful cat near his feet. This seems to bookend how Courbet saw himself as an artist and how he approached his work. The people on the right are friends and writers. Note the young boy on his hands and knees doodling on the floor. I like how the wall behind them is fuzzy and full of paintings indistinct, unclear...like his subconscious. Read the official interpretation at the Musée d'Orsay here.

Courbet depicts himself here as calmly accepting the influences of his immediate world and yet focusing on painting as if the key to his own sanity. An apt allegory for any artist, in any time.