A Neoclassical painter from France, François-André Vincent was born on December 30, 1746. Known for being one of the founding members of the Académie des Beaux-Arts, Vincent's growing reputation would become eclipsed by another French NeoClassist who would define the era, Jacques-Louis David. Nonetheless, Vincent deserves merit for his use of color, his draftsmanship, his portraiture, and his distinct visual narrative.

In Belisarius, a former soldier carefully eyes the legendary general as he offers his donation of charity. He recognizes him, but says nothing as Belisarius is a blind beggar, once a formidable general who served under Justinian defending Italy from the Goths. Note the difference in color saturation between the soldier and Belisarius, who is paler and downcast, yet still maintains a strength and quiet dignity. There is a complex arrangement of arms between the boy, Belisarius and the soldier...note how they form an "x" between the soldier and Belisarius while extending between the boy and Belisarius. Vincent creates a more natural version of this theme which was also depicted by David, and is one of my favourite paintings. Although lacking the chiaroscuro and drama of David, Vincent here uses a tight composition with the ruins of Rome on the side of Belisarius and over the solder's shoulder on the right we see a hairy face that foreshadows the Goth's eventual victory over ancient Rome.

Zeuxis Choosing his Models for the Image of Helen from among the Girls of Croton, 1789

This is from the story of Ancient Greek painter Zeuxis who looked for the ideal woman to paint the beautiful Helen of Troy, and finding none he decides to combine the best traits from five of the fairest women of Croton. Vincent devises an interesting composition here, with Zeuxis and the figures on the left in a diagonal line while the woman next to him creates an opposite diagonal toward the women, who are arranged horizontally. Note the woman in blue and white who turns away, apparently scorned by Zeuxis, who instead admires the semi-nude redheaded woman. On his canvas or board, there is an outline of a male figure who appears to be Paris. The green rug that the women stand on is an interesting color choice in that it appears like olive oil, and it complements the diverse robe colors of the various figures. Zeuxis is portrayed in very warm tones and sandals. Vincent creates a scene out of Ancient Greece that despite its formal design seems almost believable. 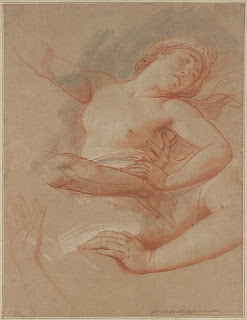 Note Vincent's knowledge of anatomy, and his facility in drawing female hands.

This unusual and disturbing piece depicts a story from Ancient Rome of Poetus who has been sentenced to death by Emperor Claudius for supporting a rebel who tried to overthrow him. In this scene his wife commits suicide by stabbing herself with a dagger. Deep shadows and vibrant color dominate here, and note the attention to facial expression here. Arria points to her temple before she stabs herself, as if forcing him to make a similar decision while he contemplates with deep unease. This is a tragic story told here without words, and it is deeply unsettling. And very effective. 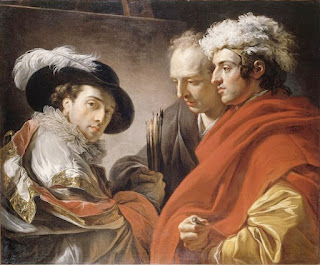 This painting reveals a friendship of three men, an artist, an architect and an unknown person draped in red. The artist may be a self-portrait of Vincent, and the architect is Pierre Rousseau, who designed the Palais de la Légion d'Honneur in Paris. This is an engaging portrait study, unusual in its composition, but superb nonetheless.

Here Vincent reveals a historical scene in which Antoine-Martin Chaumont de La Galaizière is made chancellor of Lorraine at the château de Meudon by the King of Poland. Painting of this nature requires an enormous amount of time, and it would become a genre that would be taken over by others such as David and Ingres, but here Vincent shows he is no slouch in painting multiple figures with attention to color and composition. The way he varies the space and depth of the background figures is a testament to his intelligence, insight and talent.

Vincent was no ordinary painter, and although lost in the shadow of David and others, his work still shines. Art, fortunately, never dies.