Born in Ferrara on December 31, 1842, Giovanni Boldini was a painter from the Belle Époque era. Known as the "Master of Swish" by a Time magazine article published a couple of years after his death, Boldini's style actually evolved over his career in a chameleon-like fashion. Sometimes loose and brushy, other times tightly rendered, it is towards the final years of his painting that we associate the swish of his technique with long, vigorous strokes and distorted figures, emphasizing line and grace, as if a modern Mannerism. Boldini associated with some famous artists of the day, including Degas and Sargent, who would become a life-long friend. The world was modernizing and changing rapidly, especially in France, and with it art itself. Boldini is unique in that he captured both landscapes and portraiture with ease and in the process characterized an era, evolving and moving along with it, never missing a beat, remaining very popular in both London and Paris for his long career.


In his Self-Portrait above, painted at the age of fifty, demonstrates an astute portrait of an artist who is self-aware. Assuming he was left-handed, this portrait was quickly rendered in front of a mirror with his flair for quick brushstrokes and impatience for costume as evident in the greys of his jacket. Note the skin tones of his face which he renders much more carefully, with precise pale yellow highlights on the forehead, nose and cheek areas. Note the cool shadow underneath his tie. Whatever style he painted, here we can clearly see his sense of Classical painting roots and that he knew exactly how to paint and capture a state of mind at the same time.

A charming view of the nineteenth century, Boldini uses movement and personality to create this mesmerizing street scene, decades before Henri Cartier-Bresson would do the same in black-and-white with his camera. A predominantly cool palette juxtaposed with deep warms, note how the cobblestone pavement has an array of greys, blues, reds, yellows, greens, and even oranges, with subtle lost and found edges, and yet our eyes see it as pavement. The composition reveals a fashionably dressed young woman heading towards us off-center while an old woman peasant with basket in arm walks away from us—if that isn't symbolic of a new era phasing out the old, I don't know what is. The small dog trotting across the street between them is also a curious touch. I like the elegant stage coach with the gentleman inside ogling the young woman (note the crude empty coach in front of the peasant woman going in the opposite direction). In her arms she carries a bouquet of flowers, probably given to her by an admirer. Boldini may be loose in brushstroke but he is definitely sharp in wit. 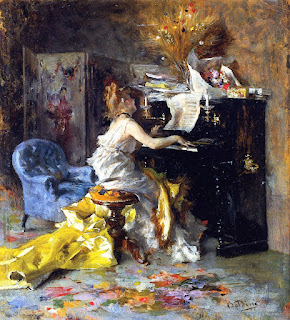 A highly colorful painting, here we can already see Boldini's bravura swish beginning to show its early traces. The brushwork seems to heighten the very music she seems to be playing. Musicians and singers would become a theme that Boldini would frequent repeatedly in his career. Making full use of his palette here, Boldini captures not just a woman or a musician but a time as well. 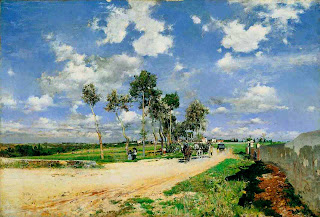 The Great Road in the Villas Combes, 1873

A stunning landscape view, Boldini reveals a knack for the natural world that could have lead him to an equally successful field had he pursued it. Influenced by the recent invention of the camera as evidenced by the wide-angle view, Boldini combines blue skies and green grass in a refreshing one-point perspective, with stagecoach approaching again to comment on the world heading toward something new and different.Boldini must have sensed that landscape was not selling or as popular as portraiture would become, as this piece is something any landscape artist would be envious of. 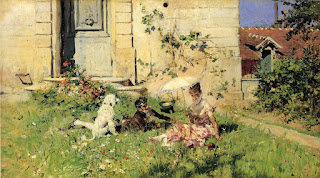 This simple theme of the bourgeoisie sitting in the grass is stunningly brilliant. Boldini's brushwork and textures here deserve special merit, both manmade and natural. The suggestion of intricate foliage, rough stone architecture, and warm green grass has an immediacy, a presence that with a simple palette creates a moment that is as real as nature itself. Like a scene from a film, Boldini captures an innocence with a low-angle viewpoint and high mid-afternoon sun to convey the simple pleasure of being outdoors. 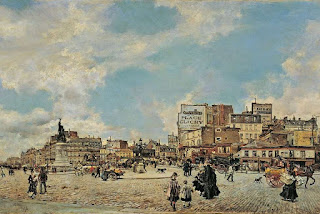 Framed like a postcard, this very modern view of northwest Paris depicts a somewhat lively neighborhood with attention to costumes and age groups. A cool sky with yellow overtones dominates a cityscape with warm colored buildings. Boldini seems to be fascinated by large signs, which feature prominently in his street scene paintings. Off in the far left we can see the statue of Maréchal de Moncey who defended Clichy from Russia in 1814. Boldini also makes use of the vast sky in his landscapes and in here as a major element, a landscape in itself, defining the city below. 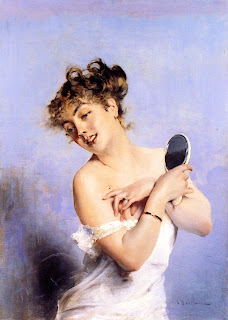 A painting that appears more pinup that portrait, Boldini nonetheless imparts his unique charm into the warm tones of her skin against a cool purple background. Her expression and feminine hand placement, with mirror in hand, sliding the strap of her dress down her shoulder is slinky and sensuous, yet somehow chaste in the way she covers her bosom. The dark shadow behind her emphasizes a strong light source off to the right of the composition. Her movement seems to convey a dancer, possibly burlesque, and if so it conveys the message succinctly.

A very famous portrait of Opera legend and contemporary of Boldini, Giuseppe Verdi here is captured with a strong immediacy that belies the friable medium of pastel. Boldini's strokes are swift and confident, much like the composer himself, but it is the expression in this man's eyes that make this portrait lifelike, and his lips slightly parted...a composer of limited education that became the giant of Classical music for all of Italy. Verdi was 73 when Boldini painted this stunning portrait, with muted palette, using a top hat and scarf to convey his immense status yet revealing a man nearing the last years of his life.

Profile Of A Young Woman

This portrait, with an unusually cool skin palette, reveals Boldini's grace of pose and femininity in capturing women. Looking away from the viewer off to her left is highly modern, yet it is interesting how Boldini bares her skin on one side and shows her elegant dress with flowers on the other, a duality of image and sensuality. The way he paints her fine hair, with lush red curls, against a very cool background, is uncharacteristic of any other portraiture he did. And it is hypnotic.

Here comes the swish. Boldini at some point must have been fascinated by the way the paint moves across a canvas. The subject matter is again the bourgeoisie, much like his contemporary Sargent, but with his own color and brush flair for the spirit of the era. In this case, Luisa Casati was considered one of the wealthiest women in Italy at the time, and probably one of the most eccentric also. Her desire to be "a living work of art" put her in contact with the most prominent artists of the day, and in this portrait, one of a few by Boldini, her exaggerated elegance and stature are conveyed perfectly. Boldini's palette of warms and purples creates a sense of drama that is interesting to look at, but is all about image and less of the woman, sadly. 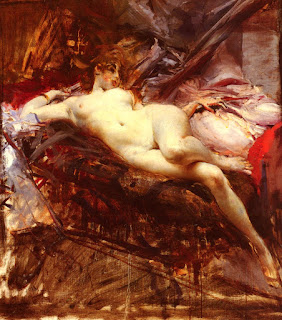 One of Boldini's boldest and most sexual of his nude studies, this lustful pose of a woman, with an unfinished face in an unfinished bed, reveals his vibrant imprimatura strokes with flesh coming alive around it. It is not clear why he did not finish this study but one can only assume that he said all he wanted to say here, and the pose is highly sensual and raw...maybe he was tired of painting well-dressed bourgeoise pretending to be proper and prim. 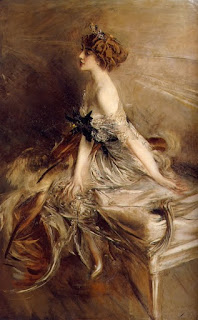 I like this portrait for its delicacy and soft warm light, sensual and elegant, Boldini gives respect to this beautiful woman and writer, whose life would make an incredible film. Using a largely monochromatic palette, Boldini breathes life into someone who deserved her status and grace with a blend of modern and classical. This is also an apt description of Boldini himself, who hobnobbed with Parisians and the social elite and created his own aesthetic to depict them. Sadly his later works reflect the foreshadowing of modern art which would swarm over Europe and North America, but here, in his thought-out works, we see a mind that was able to encapsulate the modern era upon a foundation of solid painting. His portraiture and urban scenes, are still the poetry of a long-forgotten era in time.