Pieter de Hooch, the Other Dutchman 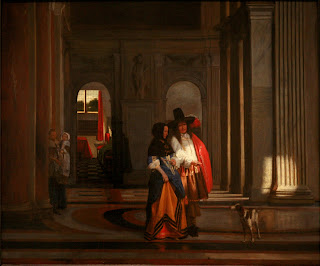 A Couple Walking in the Citizens' Hall of Amsterdam Town Hall , ca. 1665


A contemporary of Vermeer yet not nearly as famous, Pieter de Hooch (pronounced Peter de HOHhuh) also known as Pieter de Hooghe was baptized on December 20, 1629— for some reason birthdates were not always recorded accurately or at all, as was the case with Vermeer also. Similar in style, it is not known whether they ever met or who influenced whom, although present day scholars believe it was Vermeer that influenced de Hooch. This genre of Dutch painting that explores everyday life, completely secular, is the one similarity they both have but if we look more carefully there are very distinct differences between these two Masters. And de Hooch, far from being the lesser of the two, is quite the contrary as we will see in these examples.


De Hooch seems to have favored warm light and a warmer palette than Vermeer. In the above example, A Couple Walking in the Citizens' Hall of Amsterdam Town Hall uses light in a way that Vermeer never did. Basking the figures in translucent shadow with only a ray of light across his sleeve and spilling on the far right pilaster. Behind them we see slivers of light between the columns and coming from the room in the far background. Note how the figures here appear natural and in mid-gaze, as if from a photograph...the man appears to be talking about something with the woman as they stroll down the corridor. Vermeer's figures tend to be quite posed by contrast, relying heavily on Dutch symbolism of the day; de Hooch captures life as it happens, and the symbolism remains but around the figures. The couple walking in the painting gives a sense of space and presence, like we are in the church observing them from a distance. At the same time, de Hooch uses the color red and two arches to frame a story of a matrimonial future with one room accented in red and the other arch shows the man "dominating" the narrow space as if to reveal his patriarchal superiority. The woman pulls up her orange skirt to reveal red underneath, possibly to reveal she might have just as much or more real power in the relationship, yet both walk side by side. The dog is a sign of fidelity. Mother Lacing Her Bodice beside a Cradle, 1660

This breathtaking masterpiece reveals why de Hooch is not at all a copycat of Vermeer, that in fact he is on a level that Vermeer never was. Where sparseness of interior details and bare walls defined Vermeer, de Hooch instead embraces a much more believable view of life in 17th century Holland complete with all the domestic belongings and their textures that add a richness and character to this family. De Hooch uses strong verticals in this composition with the curtain and doorway as prominent horizontals to balance this arrangement. Again, de Hooch plays with dappled light that culminates in a glowing shaft of light at the doorway where the young girl stands. Note the vertical reflection of light across the tiled floor, which interestingly changes color from checkered black and white to orange and black. De Hooch is commenting on the cycle of motherhood, from left to right, with the woman gazing fondly at the empty cradle to the young girl who stares out the doorway to her unknowable future. Note how natural the dog turns to the woman. De Hooch was an acute observer of human nature and life.

Courtyard in Delft at Evening: a Woman Spinning, 1657

This painting, although curious from a distance, looks quite natural up close despite its hyperreal presence. The sunlight here is bright and vivid, and the young girl squints at its brightness...the only oddity appears to be the warm red of the house and in particular, the fence behind them. Note however, how de Hooch has captured the sunlight falling on the rooftiles, against a warm summer sky...it seems real. The shadow on the courtyard is translucent and thin, almost too weak to be real yet it close to how we actually perceive shadow in life. Look close and you can see the raw umber brushstrokes on the ground near the younger woman. The trees are compositionally placed to keep our eyes within the courtyard and the blue sky above. The quiet stillness of this scene has an existential quality or mood that is intangible yet real...one can easily see how he inspired NeoModernist cinema in the 20th century. 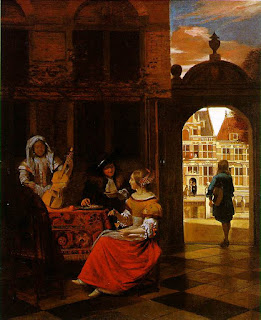 Musical Party in a Courtyard, 1677

Similar in composition to the courtyard above, here de Hooch demonstrates an understanding of color and repoussoir to frame the figures here in shadow and light. I like how de Hooch juxtaposes opposites, how the group on the left suggests an upper class with a superficial interest in music, while on the right a young man looks out in the hopes of possibly finding a career in the world. The palette here is very warm and yet de Hooch contrasts reds with yellows in a way that seems like they are totally opposite colors, merely by the use of value. And again the contrast of thin shadows with bright light. This is a true Dutch Master.

This tender scene is spontaneous and nautural, yet the composition is carefully arranged. Strong verticals and one-point perspective reveal a courtyard behind the boy with an arched doorway that leads to a woman in the far distance standing outside her door. This painting may have the sparseness associated with Vermeer yet within its simplicity lies a contrast of interior vs exterior, cool vs warm...and presence. We are more than voyeurs as Vermeer would have us, but we are in the room with them, and this is the genius of de Hooch. Art is experience; it invites you to participate in the moment before you realize you already are in his moment.

An earlier work that is clearly more like Vermeer, yet surprisingly de Hooch uses deep shadows here. Look at the large shadow of the table on the floor. The monotony of the dim light is arrested by the red jacket of the woman to the left. Curiously, the seated figure appears to be reading the palm of the woman beside him, which would explain the low-key mood of the scene. Again, the strong sense of presence is a key to De Hooch's work. And his figures are never ornamental, they are always doing something. Both simple and surreal at the same time, we are suddenly transported into the bedroom of a home in 17th century Delft Holland. Note how the tiled floor has a large uneven slope in the middle of the room, yet this mother and child don't seem to care at all. Their lives are full and content. The young girl has a toy of some sort in her hand and smiles fondly at her mother. Note the attention to body language again here, how the child stands by the door compared to the mother folding sheets. De Hooch's palette is remarkably varied in this painting, yet muted and earth-toned, with no garish or loud colors to distract the eye or draw attention to any particular element. Texture and light abound, and de Hooch makes a piece that is pure music.

Where Vermeer was drawn more to the iconic and as I mentioned in a previous post, his artwork is proto-Postmodern while de Hooch takes the familiar and through his eyes we relive it with a natural freshness that few artists throughout history have been able to accomplish successfully. De Hooch did more than paint well or blend shadows carefully, or even use light effectively...he could see. Really see. Life's brief moments are some of the most meaningful. Even if they have nothing in particular to say.