Christ and the Woman Taken in Adultery, ca.1550


Jacopo Comin, (or formerly known as Jacopo Robusti) knicknamed Tintoretto because his father was a clothing dyer, was born on September 29, 1518 in Venice. Also known as Il Furioso for his frenetic speed and dynamic energy to his painting, Tintoretto really embodies Mannerism: long twisting figures, complex compositions, and dynamic perspective. Like all Mannerists, he was deeply influenced by Michelangelo but gave his work the distinct Venetian touch of Titian's colors with his own chiaroscuro. It must have seemed remarkably modern at the time, pushing the limits of what was learned from the Renaissance to something less stiff and more dynamic rather than purely harmonious. Unfortunately, this movement would eventually suffer from its own selfish vices to become artificial and posed, lacking any sincerity or real drama that would come to be replaced by the Baroque in the early 1600's.

Tintoretto's technique is remarkably sketchy, for lack of a better word, yet he manages to create a sense of space and solidity of figures, even if exaggerated to eight or nine heads high. In the painting above, he gives this biblical scene a Venetian grandeur and volume with rows of ionic columns and an intricate tiled floor in perspective. Although the figures on the left seem to be of similar height Tintoretto creates a subtle arc behind Christ. Instead of focusing on anatomy or even drapery, he creates space using body language and facial expression to reinforce the reactions of the figures. Note the soft warm shadows on the floor. Tintoretto knew that from a distance our eyes would fill in the lack of detail and refinement that would have normally taken for a painting of this scale.

Here Tintoretto combines one-point perspective with dramatic chiaroscuro to generate a sense of realism and presence. The Venetian architectural details are still present, along with the distant blue skies to pull our attention into the depth of the painting, yet he also does something probably never done before: dinner at a long table in such deep perspective with figures on both sides of the table, yet still managing to create character in each one of those faces, and even the food and glassware on the table is very convincing. Tintoretto's figures here are more individual, and more attention to costume is made also. Interesting how he uses light colors for the figures on the right side of the table, while the left figures are in vivid, warm colors. Tintoretto was a master of composition. Every figure in the painting seems to lead the eye somewhere. This painting has the sense of voyuerism, that we are in this room watching these people, and it works. Very well.

Note the dynamic leftward slant to this composition. Danaë herself here appears to be sculptural and fleshy, with more attention given to her since she is the main subject. The faces are reminiscent of Veronese, with deep greenish hues on the figure at right, yet the coloring has a distinct Titian feel here in drapery. Note how the distant sky is now dark and gloomy. I love how the coins are casually draped across her upper thighs.

This is an absolutely beautiful painting. Bold color, deep shadows, and brilliant figure arrangement. Tintoretto uses gold hues to contrast with the warm reds and greens here. Tintoretto this time draws inspiration from Raphael, but instead chooses to heighten the crowded figures by making his signature arc once again, leading the eye to the foreground with the brightest, deepest colours. By making Esther lean backward at an angle it immediately attracts our eye to her, and in keeping with the twisting figures of Mannerism it gives her that unique asymmetry he was looking for. Note the perspective of the floor tile behind the figures.

The Presentation of the Virgin, ca.1556

A dominant triangular composition in perspective, this time Tintoretto uses an elaborate staircase to lead the eye upwards. This is Tintoretto in his mature style. Compare with Titian's version here and you can see how he easily surpasses his master. The attention to the figures here serves to heighten the drama of what is happening, and therefore Tintoretto paints each figure with precision and thoughtfulness. There is a musicality to the flow of the painting, in how the figures are graceful in themselves yet also contribute to the whole of the composition. As much as he was a Mannerist, Tintoretto's use of chiaroscuro evidently would have had an effect on those artists of the late 1500's who would form the Baroque, for he is clearly using light to tell the story also and not just composition. 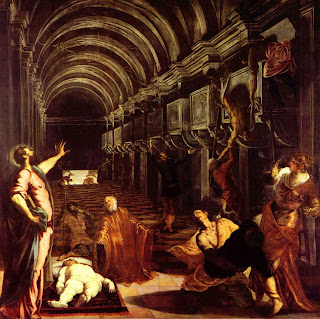 A stunning achievement, Tintoretto definitely pushes himself with each commission he receives and here we see a culmination of his genius. Now how the perspective is combined with light to heighten the architecture and mood in way that is cinema-like. The contorsion of the figures serves to tell the story here and nothing less. The tiled floor here in perspective now takes a back seat to the drama unfolding. The body of St. Mark lies on the floor in perspective, yet watch how it contrasts with the figures clutching on the right. Note the realism of the figures pulling the body from the balcony above right. Tintoretto seems to be moving away from Mannerism himself here, toward something deeper. And real. 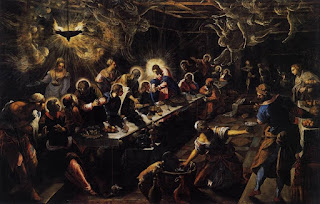 A highly unusual depiction of the most famous scene in the New Testament, Tintoretto takes what he learned from Marriage at Cana and Finding of the body of St Mark to create something that borders on the surreal. Swirling transparent angels, brightly colored apostles, and a shiny, very long tablecloth. Tintoretto may have been trying too hard here, in my opinion, for there is so much going on for such a simple scene.It is visually compelling, and yet at the same time somehow veers toward sharp excess. 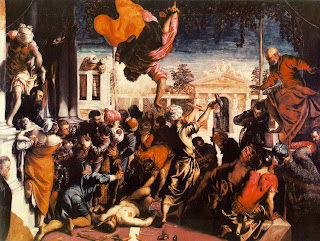 
This stunning work shows what Tintoretto could do with anatomy and figure arrangement when taken to Classical lengths. I had the pleasure of seeing this massive painting way back in 91' and I remember being mesmerized in front of it. These figures are basically life-size. Despite the more finished appearance, up close you can definitely see the brushstrokes of Il Furioso along with a keen balance of warm and cool drapery. Each figure here was very carefully thought out, and yet it still has Mannerist touches, revealing where the movement could have gone had it matured to this degree. I love the floating figure above, descending upside down, foreshortened, from the heavens...Tintoretto here ignored his love of perspective and instead concentrated on his composition skills and figures in a way that hasn't quite been equalled. Every figure has a purpose in a painting.