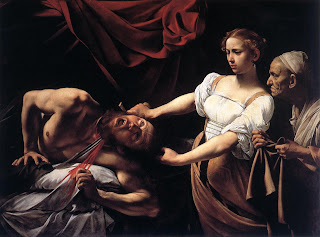 Grand Master of the Baroque, Michelangelo Merisi was born on September 29, 1571 at his namesake town of Caravaggio east of Milan. It's fair to say that he was among the first true "rebels" of the art world, having lost both parents at an early age and after his training in Milan under Simone Peterzano, (who had trained under Titian in Venice) Caravaggio moved to Rome and lived on the streets until he could find work. During this period Caravaggio would have witnessed the Mannerism of the day waning and naturalism beginning to make a comeback. What separates Caravaggio from the Renaissance, Mannerism or even Venetians is of course the low-key mood of his work, taking the chiaroscuro of Leonardo to the limits of darkness, away from the ideal and artificial. The poverty, disease and crime that must have occurred during that period in Rome was clearly enough to contrast with the glowing saints and madonnas in painting of that era. Caravaggio would find this hypocrisy unbearable and distasteful. So, in this sense, Caravaggio becomes the first realist painter, depicting religious subject matter in a dramatic light but using real-life people as models. Caravaggio was also the first to depict violent acts from the Bible in highly realistic detail, with blood and all, to heighten the severity of the story behind it.

In the painting above, Judith decapitates the Assyrian General Holofernes to save her people. Up until this point most paintings portrayed Judith holding the head of Holofernes on a plate and looking at the viewer innocently but here, Caravaggio captures the horrible act midway, and the expression on her face is clearly one of disgust and horror at what she has done. She is not innocent here, and she knows it. Yet note how he manages to pose her in a graceful, Renaissance-like dignity. Caravaggio must have used himself as a reference in the mirror to create that horrifying face of Holofernes. Caravaggio uses red drapery as a pointing device to the head of Holofernes to heighten the drama and blood. Everything else is black behind them. Note the eagerness of the old woman beside her, with cloth in hands. Impressionists should take note here, in that even to this day so many artists and art instructors tell their students never to use black in their paintings— baloney. Look at how much drama is created here, and how different this scene would appear with any other color behind them. Black not only sets the stage, it actually brings to life the skin tones and costume of the subjects surrounding it in a way that no other color can. Warms are rich and deep, and the cools are made even more cooler still by this contrast. 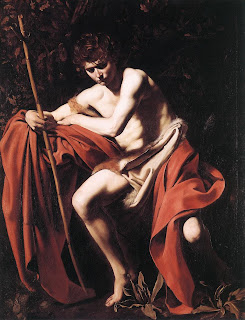 Note the youthfulness, the rebelliousness of this young man, a sort of self-portrait of Caravaggio himself, if not physically then psychologically. The loner. The outcast. The martyr. Here once again the drapery heightens the subject, in this case it underlines the posture of St. John. Note how he is lit almost by a spotlight from above, a tragic character on a stage, with that dark shadow falling on his torso. One of many versions of John the Baptist painted by Caravaggio, some ranging from toward the homoerotic to this deeply troubled youth, it was a theme he identified with throughout his life, and would prove to be somewhat prophetic in his own short, troubled life also. 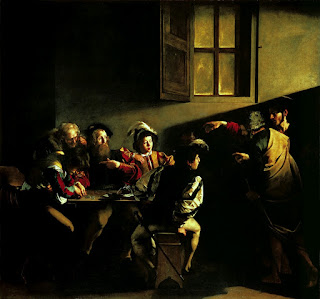 I remember first seeing this painting in my late teens, early twenties, and being totally engrossed by it. Caravaggio actually used light itself to tell a biblical story. I cannot imagine how incredibly modern this painting must have seemed when it was first displayed. Saint Matthew, Saint Peter and Christ in a local pub! The sheer nerve, the audacity...in an age where people were guillotined and burned at the stake by the Inquisition for trivialities and here a young painter from Milan shocks all of Rome with this scene. I can only imagine the amount of explanation required to defend Caravaggio. What is interesting about this composition is the primarily horizontal subjects, yet he uses foreshortening and the "tennis" effect of shifting our eyes back and forth from the group at the table to Christ and back. The room is empty and dark. There is some debate as to whom Matthew actually is here, the old man pointing to himself or the young man at the end looking down at the coins on the table. The sword of the young man on the right of the table points toward the old man, but the old man seems to be pointing at the youth on the left looking at the coins. I believe Caravaggio here is implying the Church's beliefs and it's fixation with money are at odds, and yet both Christ and St. Peter seem to point at both of them essentially. Religion and money go hand in hand, at least in the case of the Roman Catholic Church. 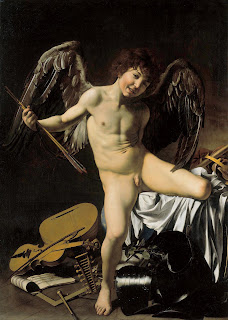 Note here Caravaggio's genius for the still-life...musical instruments, sheet music, glimmering black armour, not to mention highly realistic wings on the back of Cupid. Caravaggio seems to ridicule the entire concept of Cupid, portrayed here insolent and almost laughing at itself, far from the idealistic Roman god of love from Roman mythology. Although appearing homoerotic, it is doubtful Caravaggio would have implied this. Cupid is typically depicted as an innocent cherub or baby angel, yet here he is a mischievous prepubescent boy who cannot help himself getting into trouble. His skin tones and anatomy here are superb. It is entirely possible Caravaggio may have depicted a slightly older Cupid to reveal an unspoken pedophilia lingering in the Church itself, but this can only be speculation. Caravaggio however, was a very cynical man. 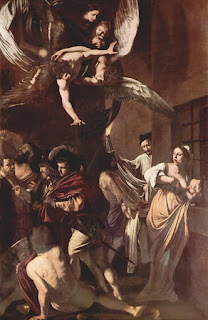 Read more about the painting here. Note the brilliant composition here. Dominant horizontals with foreshortening in the center, with the top and bottom figures twisting and facing opposite directions, and the top figures containing an almost mirror-image angel with Madonna and child. Caravaggio's take on a symbolic theme, with his deeply dramatic and realistic figures, is enthralling. The eye doesn't know where to look first. And yet it flows in all directions. 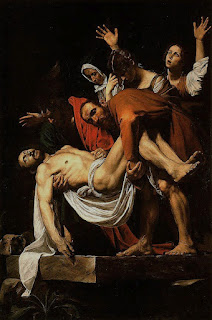 Another brilliant composition, this time utilizing two-point perspective of the floor, and with Christ's body as the dominant horizontal. He uses red again to heighten the drama, this time however using green in the same figure holding Christ. Caravaggio really emphasizes the physicality of Christ in the struggle the two figures have in carrying his body. The influence of Raphael's Transfiguration is obvious here, even if Caravaggio's dislike of too much color is present in all his work. 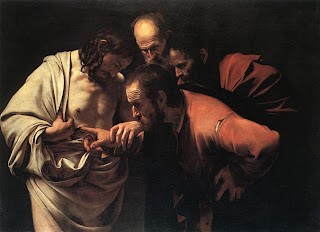 A powerful yet simple painting, this is a story everyone knows from the New Testament. Here, Caravaggio emphasizes the skeptical mind, the need for empirical proof, and the lack of halo around Christ who is now risen. This aptly demonstrates Caravaggio's realism also, from a history of icons to idealism to bare facts and unpleasant truth...and it is hard to know whether Caravaggio actually believed in God or whether it was just a way to make a living as an artist. I suspect the latter, but in the process of his art he unwittingly changed art.