Born September 29th in 1703, the Master of the Rococo, François Boucher is the painter associated with warm skin tones, vivid cool backgrounds and clothing, and probably for the first time in art history, painting nude women for the sake of beauty and nothing else. In direct contrast to the dark realism of Caravaggio and the Baroque, Boucher is about art for art's sake, which irritated many of his critics, but his style is not as easy to categorize as we might think. Boucher's landscapes are idyllic and lush, providing a backdrop for his subjects, and yet he is among the first to really introduce a natural, erotic element to his women that seems innocent at the same time. Technically, Boucher was an incredible draftsman and he fully embraced every medium of his day, his influence carrying into the decorative arts also, such as porcelain and tapestry all throughout Europe. While he may have had less of an impact on art than others who came after him, I like Boucher's creativity and playful spirit.

In Vulcan Presenting Venus with Arms for Aeneas, Boucher creates a loose triangular composition filled with color and texture. Despite the seemingly casual arrangement of figures Boucher has actually put a lot of thought into this painting. The background forms a circular, dark frame around the figures, the left side airy and mysterious, with distant verdant landscapes, while the right side is rocky yet has both adult and baby angels. This seems to suggest a duality in the female and male, the Apollonian and Dionysian. However, Boucher couldn't help himself when it came to sexual innuendo: look at how Vulcan's sword is angled, like a giant phallic symbol that both Venus and her friend are definitely taking notice of. It's no coincidence that both of them are scantily clad in red flowing drapery. What is also curious is how Boucher has also paired all of the figures—except for Vulcan and the angel by his feet—and not only paired them, but he created a V-shape space between all of those figures. Boucher keeps our eye wandering round and round the entire painting by careful use of figure arrangement, framing and use of lighting effects to open up the sky and the area behind Vulcan to suggest fire. So much for art for art's sake.

Below are a sample of Boucher's beautiful drawings: 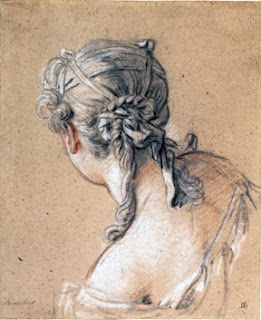 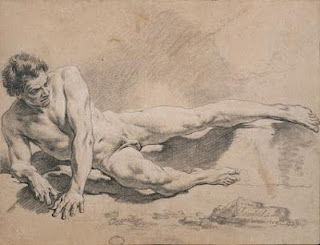 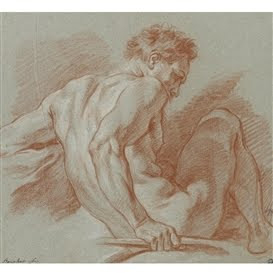 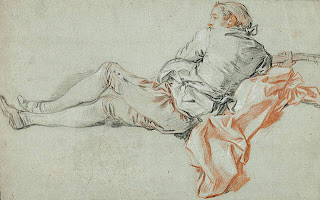 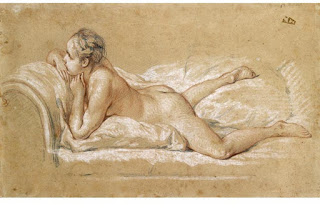 A Female Nude Reclining on a Chaise-Longue, c.1752 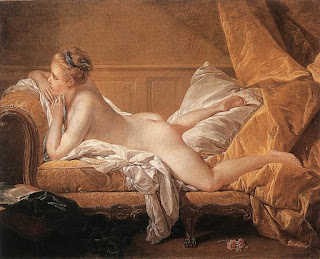 Boucher captures both the innocence and sensuality of an attractive young girl who was one of the many "favourites" of the King. Such a painting even a hundred years earlier would have probably resulted in a huge scandal and big trouble from the Church, yet here it is as modern as anything today. Note how the warm tones of the chaise-longue and curtain complement her skin. The drawing above is a study for this painting, and Boucher changed very little in the pose as we can see here. It is an idyllic world that elevates rural life into poetry and fable. Boucher is all about pure fantasy.

Note how the use of repoussoir on the bottom frames the composition. Boucher uses atmospheric perspective to create the mood of this dreamy landscape which, although may not be completely accurate in general perspective, is expressive. The landscape itself is like a stage, and the trees are the subjects. Boucher's utopia is an idyllic pastoral moment, not bourgeois materialism, even though he painted much of that also. Here he uses oranges, yellows and greens with greys to make a soft mood that is captivating and peaceful. 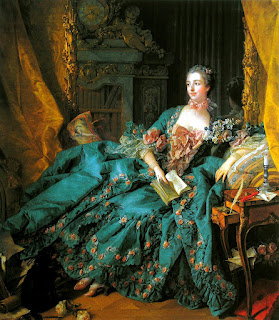 The chief mistress of Louis XV, Jeanne Antoinette Poisson aka Madame De Pompadour, named after a region in France where the king gave her the estate and official title of Marquise. She has been painted by many artists but this version by Boucher, with his clever use of warm and cool colors that portrays her as an elegant and intelligent woman. The minute attention to the details of her dress is a testament to her reputation in the court and to King Louis XV, as such a portrait would have only been reserved for the most distinguished aristocracy. Despite her tiny shoes, Boucher creates a celebrity of her day, a personality that intrigues us and makes us want to know more about her.

An erotic theme of Greek Mythology that has been depicted as far back as the ancient Romans in Vesuvius and Pompeii, Omphale was a mistress of Heracles. Notice again the cherubs in V-shape formation. Boucher here creates a very passionate version (probably quite risqué even for its time) using both pink and red to visually underline the characters' lust and their gender. Take note of how the drapery covering his manhood neatly carries over her lap into her "area". In all of the paintings in the last five hundred years this may have been among the first to actually show a man and woman kissing passionately. One would expect there should have been a lot more. Boucher was a smart man.