Eugene de Blaas was born on July 24, 1843 to Austrian parents in Albano, near Rome. He learned to paint from his father, Karl Von Blaas who then moved the family to Venice where Eugene stayed for most of his career. Blaas has a style known for vivid colors, theatrical body language, graceful figures, intricate costumes, and the contrast of fishing community against the rustic walls of Venice. I have never seen his work in person yet, unfortunately, and some might find his art overly sentimental or dated but I think he deserves attention as a unique artist that was able to merge his academic art training with the world around him not as a realist per se, but a storyteller and creator of mood. I suspect he inspired many illustrators of the 1940s and 50s with his particular use of body language and facial expression to create a context that captures our attention.

In The Serenade we see four women respond individually to the guitar of this barefoot fisherman. There are some complex color arrangements here, and the type of fabric and clothing each woman is wearing seems to accurately reflect her personality type. Notice the differences between the first two women, and how the first is quite straight laced while the other looks up at the fisherman resting her hand close to his knee. Compare this to the seated women knitting the net, and how the first is facing away from the fisherman while the redhead is moved by the romantic sounds of his guitar...the net itself seems to have a sexual connotation. At any rate, the intricate balance of textures and colors is a feast for the eyes here, and Blaas tells a simple story better than a camera or film ever could. 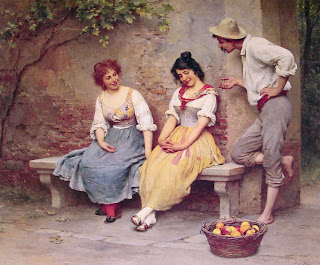 
Blaas must have been a fan of the opera, and the compositions he creates seem musical themselves. A keen observer of body language, we can clearly see the persistence of the man talking to the pretty young brunette, who sheepishly stretches her arms out, legs crossed, yet maintains a smile on her face. Her redhead friend is entertained by this situation and studies her reaction carefully.On the ground a basket of fruit symbolizes her temptation. Blaas may have been guilty of the same motifs in his work, namely the rustic walls and similar cast of characters, but there is a timeless quality to his art that virtually anyone can relate to, much like the opera of his day. His hand gestures and attention to feet positioning should be noted for their innate accuracy and storytelling ability.


Blaas attempts to create a sense of intrigue within a framework of curiosity and gossip. Note again his hand and feet positioning. One foot points to the action happening outside the door while her other foot points right at us, the viewer. One hand leans against the door while the other is behind her, ready to pull back at a moment's notice. Blaas describes women in a way that we can all relate to, and he never yields to blatant sexuality or nudity— his audience may have been more family-oriented, preferring the everyday to the melodrama of Biblical or Mythological studies that were already done for centuries. Blaas is a painter for the people.

Note the colors in this piece. The mother appears wearing the very flag of Italy as she sews her son's sleeve, while the redhead is ready to give scraps of food to the cat. Texture is Blaas' genius. Look at the shadows of the pots on the walls. A very simple theme with strong, tender women. 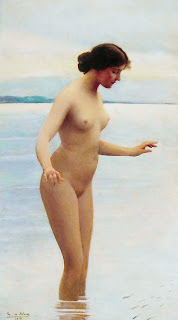 This could possibly be the most innocent nude of a woman ever painted. Although her beauty is unmistakable her immediate task is only to reach the shore without stepping on sharp rocks. The brushwork here, ironically, is quite Impressionistic, especially in the highlights. The subtle pink brushstrokes of her thighs, the warm shadows on her face, and the purple reflection of her ankles in the water...this work manages to be feminine in the purest sense of the word.

An animated expression such as this, with the appropriate hand gestures describe a lot of Italian women, both of that era and today. What is curious about this painting is the lack of supporting cast...who is she looking at? By focusing on her as a subject the painting has more immediacy and character, like a soliloquy or monologue of a play or opera. Maybe the story is up to the viewer's imagination sometimes.