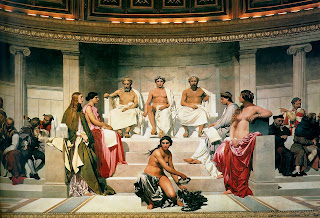 Hippolyte Delaroche, aka Paul Delaroche, was a French painter born on July 17, 1797. A true Classical painter to the end, Delaroche breathes life into whatever subject matter he paints with a unique realism, whether portraiture, mythological or historical. Delaroche is the one you have to see in person in a museum to fully appreciate.

The above painting is actually a section of a massive curved mural (over 27' long) at the École des Beaux Arts, hence the name Hémicycle. Taking over three and a half years to complete, seventy-five artists from the past to Delaroche's era are represented here in life-size scale, and some are easily spotted such as Rubens, Raphael, Michelangelo, Velazquez, and Van Dyck. This painting was done apparently in both oil and encaustic, which shows the incredibly vivid colors quite well. Why this theme of honoring the great artists of the past was not continued is quite sad, actually, and speaks volumes about our current narcissistic and myopic society.

The Death of Elizabeth I, Queen of England, 1828

An interesting historical figure, Queen Elizabeth reigned in the era that became known as the Elizabethan era where literature, theatre and music flourished, and poets like Shakespeare. Although she was not a patron of the arts like other aristrocracy in Europe she was a shrewd leader and in her later years she aged quickly, as is depicted here by Delaroche. He bathes the scene in a golden light, with figures surrounding her Highness in horror as she approaches her final moments. In the background three knights engulfed in shadow look upon her. She lived in an age of intrigue and plots to kill her, and the mood of this painting definitely draws upon these themes. Delaroche creates a very sombre scene that is palpable and unnerving in that death touches everyone, including royalty. 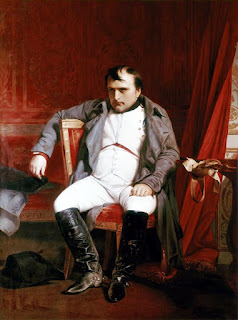 This historical figure needs no introduction at all, and here Delaroche captures a tireless mind lost in his own anxiety. Note the details of his boots. Delaroche creates subtle browns and greys on his jacket to give the impression of being well worn, yet the bright red background serves to illustrate his importance as one of the greatest generals of all time. 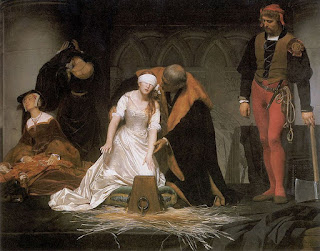 The execution of Lady Jane Grey in the Tower of London in the year 1554, 1833
click here for zoomable version

A stunning work, this depicts the execution of Lady Jane who was Queen of England for only 9 days before being executed here of high treason for not having a valid claim to the throne and being Protestant, without any trial. She was only sixteen years old. Delaroche captures her innocence perfectly here, dressed in white and blindfolded as she is led to the cutting block. Even the executioner appears reluctant. The scene plays out with breathtaking silence and Delaroche doesn't miss any details, stressing the importance of this horrible act. 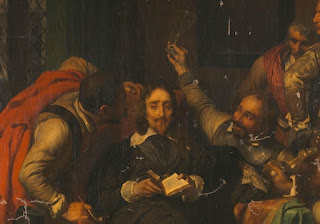 Charles I Insulted by Cromwell's Soldiers, 1836

Here Delaroche depicts Charles I of England being bothered by the soldiers of Oliver Cromwell before his own execution as being a King who abused his power and caused the death of thousands of his own soldiers for his own pursuit of power instead of the good of his country. The subtle chiaroscuro here is breathtaking, and the facial expression of Charles is so real it seems hard to believe it is a painting we are looking at. Delaroche had an amazing ability to interpret historical events and breathe life into them like few painters before or after him. Again, he is underrated in today's art world, but his achievements deserve special merit for anyone studying painting.