May 02, 2012
Yesterday was the 185th birthday of one of my favourite French painters, someone who could merge figures and landscape together beautifully like no other artist, someone who made fields of harvesters against the setting sun seem real yet dreamlike. Welcome to the world of Jules Breton... 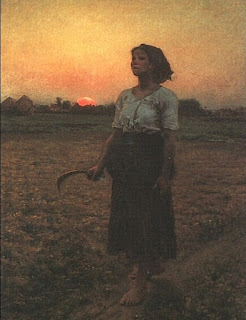 
This is like music. Squint your eyes and the golden glow of that late sun spreads across that orange sky and down that empty field...the woman is barely silhouetted against that sky, sickle in hand, listening to the sound of a lark after a long day's work. Breton is telling us to stop and appreciate the natural world around us. He also maintains the dignity and character of all his subjects, not as poor and ignorant, but real people who help to feed the world. The Barbizon School sought to cherish nature and the landscape, to preserve it from the oncoming Industrial Revolution and factories that would later lure people out of the countryside and into the city for work. Breton, however, shows the pureness of rural life as something noble, beautiful even. Although Jean-François Millet was the first to really incorporate peasant farmers into his realism, his depiction was about showing downcast faces...toiling in the field, with the emphasis on the hard work. Breton gave them faces, life, and pride in their work. 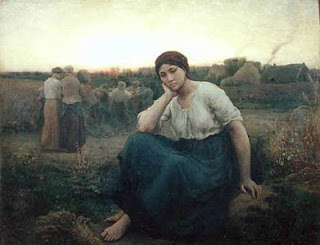 
Here a totally different mood, with a peasant woman daydreaming on a tree stump while the others go back to their homes and families. One can only speculate about what she is thinking about...a loved one far away, or perhaps wondering if she will ever meet a man. Only Breton knows the answer. What is interesting is the use of atmospheric perspective, how the figures move toward the distance, while the last two are not as far away...their heads nearly aligned with the horizon, possibly talking about the woman daydreaming. Again, squint your eyes and the daydreamer appears sharp in the foreground, glowing in that soft dreamy light. It feels like we are looking at a photo yet is more than that...it has the presence of a scene from a movie. The palette that Breton uses to create this atmospheric haze is a greenish brown against a yellow sky, and it works. Beautifully. 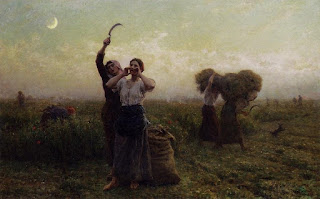 
Breton shows his knack for body language and telling a story with figures and movement alone. The two women here are calling out to someone at the end of a long day, and the woman on the left holds up her sickle, unconsciously mimicking the crescent moon in the distant sky...perhaps they are calling out to a man, flirting on the field. Note the greenish grey tones of this sky, with traces of yellow...it is a palette that no one would deliberately consider but it works. And the reason it works is because Breton studied this sky very carefully, not his tubes of paint. Diagonal lines in the grass lead our eyes to the two figures moving away from them, hunched over, with bales of hay on their backs, and the sickle of the woman appears like a weapon in her hand, perhaps jealous. The far left figure continues to harvest, yet all we see is her red scarf and blue blouse— a brilliant device to fill up empty space and lead our eyes toward the main figures. Yet if we look carefully, there are two tiny red flowers near this woman, in a near straight line, which leads our eye to the hazy figure on the horizon. This field of crops is in one-point perspective leading our eye to more hazy distant figures to the far right horizon. For such a simple painting, this is anything but simple, compositionally. Again, squint and the whole painting becomes a dream-like arrangement of characters in a poem against a stormy sky. Pure poetry. Without words.