Yesterday marked the birthday of another great Carlo, who was born in 1628, a few years after Carlo Maratta. Cignani studied under Francesco Albani, who in turn learned from the Carracci's and became a great teacher himself, influencing not only Cignani but others including Andrea Sacchi and Francesco Vaccaro. The commonality between all these artists were the use of chiaroscuro and color together with inventive composition, avoiding the overly dark and often dreary tenebrism that Caravaggio and his realism brought. Personally, I enjoy both styles, having seen plenty of both on my trip to Rome in 2010...and there is plenty to learn from each artist.

In the above example, Cignani creates a pyramidal composition that is lyrical and musical— the eye flows around this piece in circular motions despite the complex details and textures depicted here. The body language and positioning of the two children is natural and frames the goat. Curiously, the twisting Mannerist-like torso of the baby sitting on the urn shows a formidable knowledge of anatomy, as babies don't hold poses for artists...Cignani builds upon and goes beyond Da Vinci to a very physical baby who appears to playfully wrestle with his sibling. Cignani romanticizes pastoral life here, something quite rare for a Baroque painting, but all the elements are Classical, especially the woman who seems like a Raphael, swathed in white and blue. 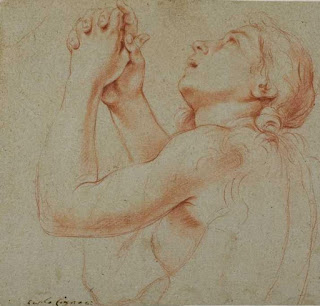 
Cignani's draftsmanship and ability to convey emotion is very clear in this drawing. Using mostly line and accented shadows with some stumping Cignani creates a moving study, probably drawn in a relatively short time as this would have been an awkward pose for a model to hold for any length of time. Cignani's technique of stumping and hatching is characteristic of all his drawings and it adds a life-like semblance of bone and skin that would be missing of only one of these techniques were used. 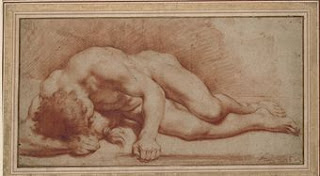 A reclining male nude, his head resting on his right arm

This magnificent drawing again shows all the techniques mentioned above. As it is not part of any study for a painting it appears to have been a life-drawing study, but what is curious about this piece is that the figure is holding a lock of a woman's hair in his right hand, as if mourning her loss. Everything you could want to know about drawing the figure is evident in here: stump and hatching, lost and found edges, accented darks and lights, and accurate anatomy with emotion.