Born in Paris on this day in 1733, Robert was not only one of the active vedutisti, or highly realistic scene painter but also a set designer for plays and landscape garden designer. Having studied in Rome for 11 years—part of that under the studio of Giovanni Paolo Panini—Hubert made numerous sketches and capricci which lead to paintings with a distinct flavour for dramatic light, antiquity and architecture that puts him in a category that few others can match. And living during the tumultuous French Revolution where he narrowly escaped death himself makes his life all the more interesting as a person; someone should make a film of his life.


In the above example, Robert uses strong chiaroscuro for this bridge in two point perspective. The fact that he shows every dilapidated stone to illustrate its age and character contrasts with a youthful sky and bright blue river underneath it...Robert seems to make a statement on the age of man-made creations that cannot stand up to the test of time. Nature is truly eternal, ageless, no matter how many centuries or millennia pass. What makes the work even more charming are the people doing laundry underneath the warm reflected light of the arch and hanging up their sheets on a laundry line. The figure on the lower right looks up, and directly above him is a cow on the bridge itself, while at the other end a long sheet hangs from the balcony, creating a triangular focal point to keep our eyes around the bridge. Symbolically, the bridge may represent the old-fashioned mentality of the time and unwillingness for progress or change. It may also show an understanding or balance between society and nature. At any rate, the feelings of quaintness and simplicity are so eloquently depicted here, an era now lost in time. (Compare that to our present modern world.) 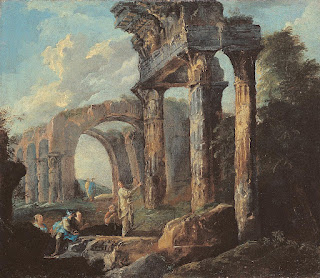 
Here we see some very loose brushwork, with thick glossy highlights with interesting greys and yellows not normally associated with a palette for architecture. Hubert creates a deep sense of presence and solidity. This time the figures are intellectuals, possibly artists or architects, comfortable in admiring the ancient ruins of Rome. Robert's brilliant knack for repoussoir frames this composition with dark trees to the right and rocks on the left, partially obscuring the figures themselves. Blue and yellow (yellow-orange) placed side-by-side is a motif throughout the painting, with green as a background colour. Again, Hubert reminds us of the impermanence of accomplishments, yet here he implies that the greatness of antiquity is immortal and needs to be consciously rediscovered in order to be appreciated. 
Finally, a painting for painters about painting and museums. Artists copying Old Masters in the Louvre and becoming a work of art themselves. Hubert's use of one-point perspective here is breathtaking. Art is immortal.