The Sensuality of Corrado Giaquinto

Allegory of Peace and Justice, 1754


Born on February 8, 1703 on the eastern coast of Italy, Corrado Giaquinto was a Rococo painter. His early training was under Neapolitan Master Francesco Solimena, then Giaquinto worked mainly in Rome, under another Neapolitan great, Sebastiano Conca. During this time he moved between Turin and Madrid where he received important commissions including Church frescos, alterpieces and a ceiling in Turin. Giaquinto marks a period in Italian Art where the elegance and sophistication of the Baroque leaned toward a more sensual liberty that would ultimately never quite return again. His work reflects the influence of his Neapolitan Masters yet also reveals a certain French sensibility in terms of colour, as he was sometimes referred to as an Italian François Boucher. Giaquinto however, has a drama that is particular in that his Baroque roots remain intact despite the grace he conveyed.

In Allegory of Peace and Justice above, he uses an incredible, vibrant palette that includes pink, yellows, and green with some red/blue accents. I love the smoky, yellow sky, with the dove of peace glowing fiercly behind them. Giaquinto uses a circular composition here, a very unusual approach that seems to work harmoniously here. To the left we see the perils of war and violence while the right depicts the natural abundance and quiet than emanates from peace...even the lion seems friendly. Giaquinto wastes none of the figures, and the cherubs themselves are also expressive and actively participating in the composition. The palette again is a clever design, using pink and light green as muted complements, with that yellow ochre balancing both of them. Giaquinto signed his name on the bottom of the fallen column beneath the cloud that Peace and Justice sit upon. I love the facial expression on both of them, so Classical yet emotional at the same time.

This stunning work shows Giaquinto's brilliant powers of drama and figure arrangement. The light falling on the male figures, while the females remain in warm shadow—except for the woman picking fruit— is absolutely striking. The figures on the right remind me of Pietro da Cortona. Here Giaquinto's knowledge of anatomy is superb, yet the way he contrasts the figures is also striking with the seated figure in the foreground left twisting, while the Bacchus figure is reclining backward onto the shoulder of a kneeling man. He holds a bowl to which a young man squeezes the juice of grapes into. Look carefully and you can see how Giaquinto reuses faces: both the man squeezing grapes and the kneeling supporter are essentially the same, while the reclining Bacchus and young woman beside him have the exact facial expression, just different gender. Rococo art is often guilty of cartoony faces in many of its figures, and Giaquinto is no exception to this...making eyes the largest feature on the face, with very round structures. In this painting however, it is no distraction and adds to the innocence of the moment. Even with Giaquinto's beautiful light, the real bravura in this painting is in the shadows, both in the fleshtones and in the drapery areas...the young woman in the distance by the tree is shaded in a warm shadow unlike I have never seen before. And the grape squeezer has bits of red light reflected in his blue-gray robe. A sumptuous painting that is a treat for the senses. 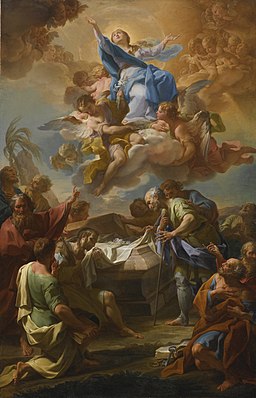 Assumption Of The Virgin,1739

A beautiful piece that shows a more mature, refined style in Giaquinto's work. A pyramidal composition, Giaquinto utilizes his powers of color once again in his unique palette of greens and yellows with blues and reds. The arrangement of Mary and the cherubs rising upwards into a warmth circle of angels is graceful and sublime. By contrasting Mary's robe of light blue and dark warm blue, she clearly stands out against the golden rays surrounding her. The two angels beneath Mary are contrasted both in posture and in colour accents of yellow and green, and also in the shadows underneath their faces. The figures below are brilliant on so many levels. Look at the way Giaquinto uses hands in each figure—we know exactly what each person is feeling or observing merely by watching how they are using their hands. Giaquinto uses frozen action to convey movement and drama. Here the faces themselves are more expressive and realistic than Giaquinto has ever painted, and one can see the influence of another great student of Sebastiano Conca, Pompeo Batoni.

This is one in a series of oil sketches that Giaquinto did for one of his ceilings paintings. Note Giaquinto's incredible colour palette here of mythological figures against a light blue sky, and how remarkably finished it looks from a distance. I love how vibrant the brushwork in those warm clouds is. The woman with the spear and dress, a symbol of Spain herself, has incredible yellow/blue coloration in the dress that when you squint, appears beautiful. The facial expressions are quite demonstrative and expressive for an oil sketch. Below them a swarthy Hercules battles the Hydra and in here you can see how Giaquinto really understands value and how it can complete a figure even with vague details. Note how musical this composition is in how the figures flow downwards in a sort of spiral, and the complementary reds and greens dance all the way down. Even the unfinished figures in the periphery are intriguing to observe. 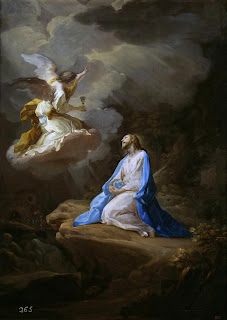 A rare emotional drama with only two figures, this is a captivating work that is seldom spoken of by Giaquinto. Giaquinto uses an uncharacteristically neutral and dark palette devoid of any greenery seen in other paintings of this very subject. Christ is glowing eerily in a weak light yet the blue of his robe is a perfect light color. The meaning is very clear in this painting and we can see how the angel points upward with cup in hand, while Christ looks up with pain and reluctance, even in the way his hands are uncomfortably folded together. Although the composition seems to lack something the drama of the two figures here, with partial foreshortening, is something to experience in person. 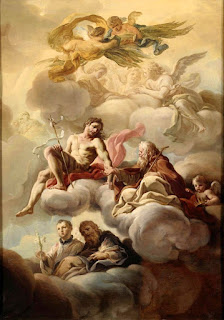 This is one of a series of studies that Giaquinto did for the lovely San Nicola dei Lorenesi Church. A beautiful use of warm light in this unfinished study or bozzetto, Italian for sketch. Despite a horizontal composition in layers it is the way Giaquinto arranges his figures with an effortless grace that we don't even think of how he did it. Giaquinto uses subtle diagonal shapes that lead the eye leftward toward the light yet it is the details of the drapery and warm skin tones that Giaquinto creates a visual bounty for the eyes. The unfinished angels above in a circular arrangement bathed in soft warm clouds contrasts with the dark and surreal clouds on the bottom figures. The use of colour accents is a particular genius of Giaquinto, and even in this unfinished study we can see how he harmonizes the palette of the figures by echoing the same colors into the clouds themselves so as not to appear like boring puffs of white. The way the figures gesture with their hands and feet also serve as guides to lead our eyes across the painting and enhance the visual flow of the composition. 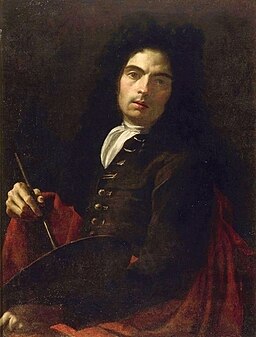 
Giaquinto here is young and confident, a self-portrait that reflects his status as a painter and has the vulnerability of an artist trying to define his uniqueness in a world where the patronage of the Church is beginning to fade and another, more modern world ready to replace it. I love how Giaquinto stares directly at us, as if wondering how far into posterity his light will reach.

A supreme colorist and musical mind at composition, Giaquinto was a shining light that is worth studying repeatedly for his passion and ability to merge the power of the Baroque with the colors of the Venetians into a highly sensual vision that is uniquely Giaquinto. Never afraid of bold or vibrant color, Giaquinto blended them easily into combinations that mesmerize and draw us in like few artists of his era could. Giaquinto was more than just another Rococo painter...he was a musician with the brush.


More works by Corrado Giaquinto here at the Athenaeum