The Greatness of Erasmus 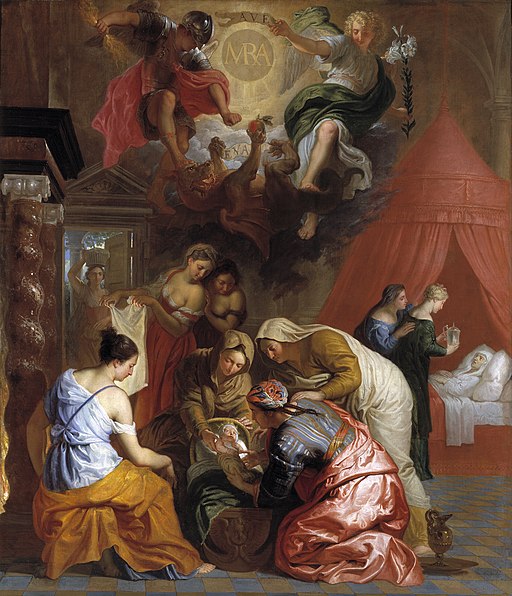 Born on November 19, 1607 in Antwerp, Erasmus Quellinus II was a Flemish painter and engraver who worked under Peter Paul Rubens. Erasmus came from a family of artists that profoundly influenced Flemish Baroque in the 1600's. Unlike Rubens, Erasmus had never been to Italy and so his style evolved from the influence of Rubens and others around him, including his brother, sculptor Artus Quellinus II. Although the influence of Rubens is very strong—sometimes easy to mistake—Erasmus developed into a deeper Baroque sensibility with less emphasis on color and sensuality and more on chiaroscuro and architecture. Today little is mentioned about Erasmus, especially in that he worked with Rubens for less than ten years yet became a major painter in the years after Rubens' death in 1640.

In The Birth of the Virgin above, we can see here that the cluttered confusion of this composition doesn't quite have the flow and grace of his Master, Rubens. The figures suspended above seem to be an out of place element that needed to be in the painting, yet would have been better hidden in shadow or with less dramatic complementary color spotlight. The main figures below, however, are arranged asymmetrically with the three to the right in a triangular fashion with the left figure in profile leaning slightly towards them. Erasmus uses a bright palette here, with some beautiful brushwork on the highlights in the drapery. The two women behind the main figures appear to be looking behind them instead of at the baby Mary, possibly painted by an inexperienced pupil. Despite the confusion, the painting is unmistakably the work of a great painter who lacked time or direction to smooth out the composition.

A common theme painted by many great artists including Titian, Natoire, Jordans, among others...Erasmus takes a more casual approach here that shows off his bravura of skin tones. Interesting how Bacchus is depicted in a child-like expression of innocence. Look closely, however and it seems like Erasmus had some fun in the way Ariadne is twisting yet slightly bending over directly in front of Bacchus' groin, her hand pulling up her dress while walking through the waters but the innuendo of sex is very tongue-in-cheek. The brushwork in her dress is amazing, however. Erasmus uses yellows and violets, even orange to contrast with the deep reds. Erasmus suggests here that the mythology here is not really that poetic and that the attraction is mostly chemical, as all attraction is.

The Persecution of the Harpies, 1630


Based on an oil sketch from Rubens, Erasmus breathes personality into the figures with incredible skin tones and graceful brushwork. The sense of movement that Rubens conveyed puts us right into the action where these two Argonauts hunt and kill the strange creatures called Harpies, half bird, half woman. Look at the original oil sketch at the Prado here.

The Adoration of the Shepherds, 1678

A stunning masterpiece that shows a much more mature style, Erasmus proves here that he no longer hides in the shadow of Rubens but is in a place of his own. Erasmus takes an often painted theme in the history of Art and turns it into a drama of light and dark that is truly compelling. Note how the two main figures are bathed in a warm light while the rest fall into warm, transparent shadow. Erasmus uses facial expression to narrate here unlike any of his other works and the influence of Italian tenebrism and Caravaggio are clear. The key figures are in a blue/green palette while the rest of the figures are washed in warm earth tones. Erasmus uses a blue grey to indicate the clouds that the angels sit atop. It is unfortunate that I could not find a better and larger image to study this painting in depth, for it is a Baroque wonder. Truly. 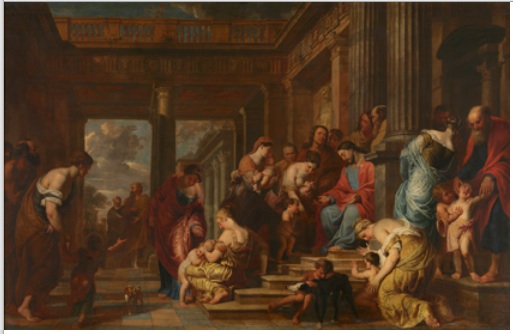 Another beautiful masterpiece. Erasmus uses one-point perspective to add depth and richness to the foreground figures. Note the group arrangement he uses here, alternating figure size by age to add visual interest and maintain the the theme of the painting. Erasmus does something unusual in placing the figures along the stairs leading up to Christ, something that if done incorrectly could have looked stilted or forced but here, Erasmus creates visual dynamics by varying the direction each figure is facing and turning, along with a rich palette that leads to a vibrant blue and red worn by Christ. He also varies bare shoulders with fully draped figures. Again, a higher resolution version would do it much more justice.

Achilles Among the Daughters of Lycomedes, 1600's

A gorgeous study in drapery, anatomy and figure arrangement. Note how the influence of Italian painting permeates this painting. Erasmus' gift for drapery and architecture here are subdued by an earthy palette with no greens. Look at that dark sky looming behind them in the far distance. Erasmus learned that perfect bodies and skin tones need not tell a story, that body language and action are the key elements. A stunning accomplishment.


Erasmus may have come from a family of artists and trained by the most successful artist in Flanders, but what he took from it and became in the process is worth discovering, even if inconsistent. Inspiring. An artist to study, over and over again.