Born on March 14, 1836 in Tournan-en-Brie, France, Jules Lefebvre was a French figure painter and respected teacher, whose students include names such as Kenyan Cox, Edmund C. Tarbell, and Paul Cornoyer. Lefebvre is well-known for his highly sensual female nudes, yet looking deeper into his work we see a keen insight into personality and character, creating mood and atmosphere as an essential ingredient in all of his paintings. A contemporary of William Bouguereau, Lefebvre approached the feminine form unabashedly and without the sentimentality of children nor the predictable satyrs and nymphs prancing about in lush landscapes. Lefebvre's women are unique and charming, as he was more keen on capturing who they were first and their physical beauty second.

La Vérité above, was modelled after a famous actress of the time, Sophie Croizette: 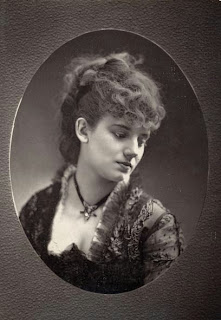 La Vérité reveals an aesthetic visual manifesto of sorts on the superiority of beauty and Classicism. Although many believe this painting was inspired by the Statue of Liberty, it was in fact completed before Bartholdi conceived of his world-famous sculpture. She stands tall and proud in contrapposto, the pose that defined Western Art and paved the way for the Renaissance and all art afterwards. Note how she holds her mirror high above her head facing us, the viewer, shining in its own glowing light. There is no reflection. Instead, we see light and dark, symbolizing the two key elements of painting. In her left hand she clutches a rope that descends from the darkness, which seems to imply a connection to the subconscious that in conjunction with the mirror indicates the intuitive nature of painting that is based on reality and nature. This is echoed by the earth, water and flora at her feet below. Although Impressionism was just beginning during this era and would eventually supplant Classicism, here Lefebvre shows us that the nude is an eternal standard of beauty and truth that will remain despite whatever trend attempts to dominate it.

One of Lefebvre's most sensual paintings, La Cigale (the Cicada) is based on a French adaption of Aesop's fable "The Grasshopper and the Ant" where in the story, the cicada basically parties all summer while the ant prepares for winter, only to discover that when the cold eventually creeps in the cicada is hungry and unprepared. Lefebvre intended the painting as an allegory to the improvidence of Napolean III in the Franco-Prussian war that France and many others expected to win, but instead were utterly defeated by the Prussians who much better trained and prepared. The painting may also allude to the seductive nature of Napolean III who by account held several mistresses. Here, she stands suggestively with little finger in mouth, while the leaves of autumn blow around her feet. Lefebvre paints her smooth skin with adoring attention to detail using a subtle palette ranging from yellow to red, with various greys and violets. This beguiling combination of coyness and erotic sexuality sets a very modern standard for the nude that was never quite attempted before in this way that, in many ways has not been equalled since.


Based on the Sack of Troy we see King Priam, who is about to be killed by Pyrrhus, son of Achilles. Lefebvre's knowledge of anatomy and skin tones here is absolutely superb. The drama unfolds as if on a stage, as if the main characters are lit by spotlight while the background rages in smoky flames. Although the composition seems to lack depth due to its horizontal arrangement, the two main figures have such presence that we can't look away from them. Lefebvre's deference to Classicism returns prominently, with Priam lieing on the ground half-robed, clearly influenced by the physical grace of Laocoön. Note how the shadowed figures to the right cower in fear. And the pair of legs on the right indicate a fatality and serve to point directly at our two main figures. Lefebvre may have been a painter of women, but here is proof that he could more than hold his own in historical painting and male anatomy.

Compare with this eroticized version painted in the same period by Leon Perrault.


Lefebvre's ode to Velázquez' Venus is hypnotic in its own uniqueness. The use of reds and yellow ochre underline the sublime beauty of this young woman against a seemingly Orientalist background complete with a tray of oranges. This is a painting that cannot do justice here online, it must be seen in person to fully appreciate the tones and brushwork. It has a spontaneity and freshness that goes beyond the strong Classicism. This painting reminds me of Gerome. I love the deep perspective and staggered stone road. The architectural details seem palpable. The strain of the woman pulling the horse counterbalances the grace of the three birds to convey a sense of movement while leading our eye down the path to the foreground figures. It is remarkably simple yet very well conceived. 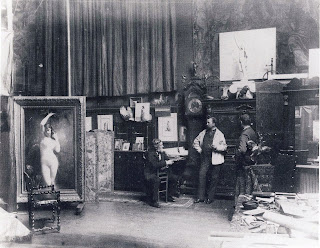 
Pure fantasy and sensuality reign here in this fiery redhead beauty against a dark earth-colored background. Again, the reproduction here has the highlights of her skin blown out and is most likely not what the original looks like in person. The black-and-white photo above reveals the scale of the painting as nearly life-size.

Lefebvre teaches us that sincerity is the essence of painting, and in being true to what beauty means as an artist in every sense of the word, not merely by a single definition. In the eyes of Lefebvre, sensuality is perfectly acceptable because it is intrinsic in who we are as people and what we desire, but also in what we are not hiding from others. Fashion is merely social status, but nudity is who we actually are, and can be.