An American in Paris

Continuing on this series of sensual artists of French background is Julius Leblanc Stewart, born on September 6, 1855. He was a Philadelphia-born artist who lived and painted most of his life in Paris, earning him the nickname "the Parisian from Philadelphia." Stewart's family had moved there when he was only 10 years old, and from the wealth of his father's Cuban sugar plantation Stewart lived and painted to his heart's content. One teacher who had considerable impact on him was Gérôme. His father's wide influence as businessman and prominent art collector helped to secure Stewart's place in the Parisian art world within a relatively short period of time. Stewart's breadth of work ranges from the social life of the belle epoque to sensuous yet fun outdoor female nudes.

Elegante au sofa above is an sophisticated yet natural portrait of a woman seated in a warm room with simple furnishings. I love the contrast in texture of her soft skirt with the ruffles of her blouse.The way she leans to one side adds visual interest, with her arms folded and hands together, the curve of her hat...Stewart leads the eye in a circular path around her repeatedly. Consider just how modern this portrait is, in the confidence of this young woman and the style of her clothing in a very French chair...she typifies a new era of the Belle Epoque.

Loosely based on Greek mythology, Nysa was a mountain in Thrace which the nymphs, or goddesses of nature, inhabited and in this case were the nymphs of the rains. Stewart does not try to Classicize these young, beautiful women in any way, but instead they are again modern and natural, unaware of being represented in a painting. I like how Stewart uses the greens of the trees in the skintones of their bodies, with a subtle use of sunlight and shadows of trees falling on their skin. It is both innocent and sensual at the same time. I recently had the pleasure of seeing this painting at the musée d'Orsay in Paris, and I can say that Stewart's work is even more captivating in person. This piece has the grandeur of a scene from a film, and according to LACMA's website the identity of all the figures depicted here is a complete mystery, making it likely that it is entirely fictional. What is interesting is the woman seated in a chair to the right in a pink dress with a blue blanket covering her legs and a pillow behind her head to indicate an illness of some sort. Is she the mother of the child being baptized? Stewart paints her with flawless attention to detail and grace, and the way she looks at the baptism tiredly but with affection shows Stewart's keen mind at work. The men in the corner seem uninvolved in the ceremony and may be discussing financial matters, while the man with hand on his head may be concerned about the health of his wife. The other interesting element to note here is the costumes of this high society are represented by nearly every color of the spectrum. Stewart's use of blue mixed with white is soft and subtle to indicate innocence, as noted by the baby, the godmother, the priest and the pillow of the "mother".

A view from the canals of Venice with the namesake semi-circular church in the background. This painting has the uncanny presence of a Sargent, another contemporary and American artist who trained in Paris and, like Stewart, painted many scenes in Venice also. Stewart uses a very warm greyish white sky to create a surreal mood of soft diffused sunlight, and the way he indicates texture and age on the buildings is understated yet enough. The reflections in the water here are what really give the painting a realism that is almost tangible, as if we are standing in that very spot looking with Stewart. A thousand photographs could never capture this kind of light and mood the way Stewart has here. In this painting Stewart seems to channel Tissot for its spontaneity, for capturing the essence of the people in his era, and for the freshness of viewing angle, which here depicts the strong tilt of the boat and the deep perspective leading up to the bow. Note how the tarp of the boat frames the scene and the figures. I love the way the woman to the left holds the brass railing behind her with both hands while casually chatting with the gentleman in white. The man to the far right reads aloud from a book while the two women listen to him with all their attention. Stewart's fondness for texture, color and costume are strong here. The scene is really about nothing important or formal, and yet it has the presence of being there with these people on this boat, sailing somewhere in Venice...moments are the essence of painting. Stewart is a natural storyteller and here under his cool green-greyish palette an obvious situation unfolds that needs little explanation and yet he piques our curiosity nonetheless. The details are what strike me, with the glint of light on the glassware on the table, the flowers behind them against the wall, the intricate tracery in the woman's dress on the left...the setting is very upper class and yet what is unfolding here has the sense of something full of gossip. Even the way the wall divider on the left seems to block them off from prying eyes or ears.

Humour is a rare but wonderful gift in art, and Stewart has taken Greek mythology, once again returning to the nymphs while reducing it to pure fun and spectacle. I am curious as to how this painting would have been taken back in the day...nude women frolicking in the woods with dogs. And while still maintaining the dappled effect of sunlight on skin and pools of sunshine on the grass. Stewart has, in spite of himself, created pure fantasy here that would have fired up the over-active imaginations of men in the 1800's. And today. 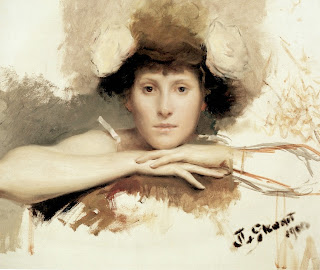 I love oil studies like this that reveal a portrait seeming coming to life on the canvas before our very eyes. This is the heart of all artists, brushstrokes that reveal hesitation in the lines, and careful thought over palette choices and color arrangements. Stewart may not have earned the reputation of Sargent, but his work was definitely not the work of a wannabe. This was a mind that could observe and see society with razor-sharp perception that could flatter and see through them at the same time. Stewart had a range that was vast and deep. And inspiring.