Born December 16, 1832 in Paris, Jules Worms was an illustrator, lithographer and painter. Worms is considered a relatively obscure artist by today's standards—he has no Wikipedia article in English—but his craft nonetheless deserves merit for its freshness and spontaneity, attention to background detail, and his particular use of color and light.

In Sortie Du Maitre above, translated as the Exit of the Master, infidelity was a recurring motif in his paintings and as we see here the wife helping her husband with his coat while turning to admire a more handsome man—possibly the landlord or boss—who is coming down the stairs making an exit. Note the incredible body language and storytelling ability of Worms here in how natural the figures are, not posed at all. The expression on her face is as natural as real life. Note the indignation and jealousy in her husband's face, in contrast to the admiring glance of the "master" at his wife. This narrative ability in painting, without any words or context, is powerful. 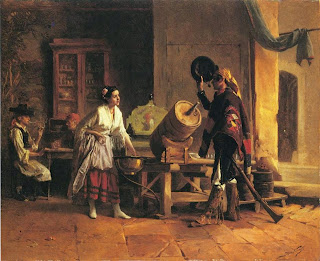 The exact history and meaning of this particular painting is unclear, but it appears to be a man who has entered a tavern or some sort waiting to be served. How Worms conjures the mood in this setting using light in a specific way to identify the two characters is brilliant. The man is half in shadow to deepen his mysteriousness, while the woman is bathed in white to highlight her generous nature. Again, the use of body language to define these people is inspiring, and must have had an influence on both painters and illustrators to come. Worms knew even then, years before the invention of cinema, that the characters of a narrative are not merely elements of a story—they are the story. 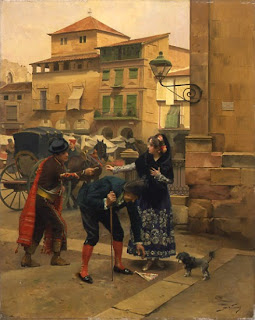 Worms creates a scene from a visit to Spain in which a traditional 19th century city forms the backdrop for an amusing scenario. A beautiful young woman and her elderly yet well-to-do husband...she daintly drops her fan in order to receive a love letter from her younger, more handsome lover while her husband naively picks up the fan. Note how the little dog gazes at the fan with his tail up in the air. Worms positions the husband with his back to the lover, bending over as if deserving a kick in the ass. Worms offers a comical stereotype of secretive love and the clumsiness of selfish marriages in a charming and unprovocative way. Worms use of warm sunlight and the textures of the buildings and sandy roads suggest a scene that could be more plausible than the stereotype it mocks.