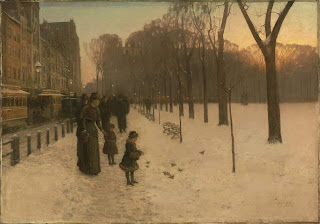 Born on October 17, 1859 in Boston, Massachusetts, Frederick Childe Hassam was an American Impressionist painter and member of the Ten American Painters. At a period in time when America was redefining itself decades after the civil war and travelling to Europe, artists and collectors became inspired by the loose brushwork and mood of this new contemporary style. Many French Impressionists were social critics making sharp statements of the change in society from agriculture to industrialization, seeking a more pure environment of an unpolluted countryside. Hassam found his niche in depicting the modern urban streets of Paris, Boston and New York, paying particular attention not only to light and color but season and mood. Hassam loved nature also, and his works reflect a fascination with texture and color, emphasizing the tangible qualities of water, grass and worn architecture. However, he also painted people, and with a keen eye that is reminiscent of French painters from the Belle Epoch.

Boston Common at Twilight above, one of his first paintings, remains one of his finest. A faint, golden light washes over a quiet 19th century street with people strolling on a winter day. Hassam uses one-point perspective to pull our eye into that warm glow of the setting sun in the background, and it works beautifully. Note the contrast of architecture and carriages to the left with the serenity of nature to the right, seamlessly balanced. A young mother watches her daughter feeding birds, and Hassam leads our eye once again to a row of young trees to complement the young girl's curiosity of nature and offers an optimistic view of a new generation willing to preserve the future. Hassam creates a real presence, a sense that despite a nostalgic tone, this quiet moment is all that matters. Hassam's love of perspective and architecture is indeed contagious, and here under an overcast sky he makes Boston look like Paris. The palette he uses is striking. Look at the contrast between the sky and the warm buildings. The brushwork and colors he scumbles on the streets is inspiring...using loose, thick strokes of yellows, blues, browns and greens. Yet Hassam uses deep darks to identify the main figures and reinforce the dark rooftops of the architecture behind them. And note the shadows of the carriages and figures on the slick streets. This would be a painting to see in person.

At first glance, this work has a more affected quality that I don't quite appreciate as much because of its overall similarity of brushwork, but Hassam does use color more effectively here. The sense of motion may have been what Hassam was aiming for, and the carriages moving toward that one-point perspective with the fuzzy greens trees works well here. I also like how the pedestrian women, dressed stylishly, add a flavor to this painting that might otherwise seem empty. Note how the thick brushwork in the reflections of the foreground streets hint at a post-impressionist influence. Beautiful color juxtaposition. This is a fun painting, and having walked the streets of the Champs Elysées myself in the rain I can testify how little the charm of this area has changed in spirit, even in our high tech world.

This curious but fascinating study, done in gouache on paper, uses a strong green palette with a warm orange-red as an accent color. His understanding of light here, with those shimmering white brushstrokes across the water and along the edge of the bridge, is captivating. Even the muted grey green strokes across the sky complete the mood, and Hassam shows us that starving the palette can lead to astute and charming scenes such as this without the need to exploit color.

This piece has a very British sensibility, and yet the way the sitter looks away from us indifferently makes us more curious about her. A vibrant chair with sumptuous complementary colors adds life to an otherwise quiet and somber portrait, and suggests something about her that wants to be expressed. An apt metaphor for the politically correct Victorian Era, not much different than our own era, where people talk politely yet feel another way inside. The background always tells the story in a painting, and Hassam makes use of this by suggestion, by poetry...not explanation.

Hassam's Van Gogh influence is quite apparent in the background post-impressionist strokes vibrating behind this tender portrait of a nude young woman. Again, the focus is on the inner state of the woman, what she is feeling and thinking, yet too timid to look up at us. Hassam sees true beauty in modesty and innocence. Her pale skin contrasts well with the vivid strokes of cool and warm foliage surrounding her. 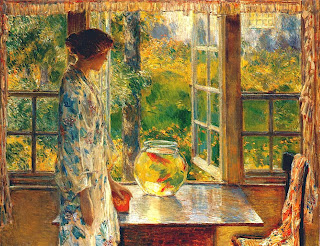 A striking display of sunlight and mood. Look at the vibrant palette he uses here...low-key yet the colors sing. The fish bowl is often used to symbolize a lack of privacy or "not getting out much", and here he is probably commenting on the secluded life of women in early 20th century America. This painting is beautifully hypnotic.

This very high-key study with a cool palette feels like a scene from a film. The woman appears to be holding a mirror, gazing at herself. If so, it then portrays a very different meaning than the previous work and suggests the oncoming narcissism of society in the decades to come, ignoring the meaning and beauty of nature. Look at the wild use of colors on the rocks in the right--Hassam even used violet! Even in the white rocks she sits on have a multitude of cool colors with some warm accents. But it is the dynamic arrangement of the ocean raking across the composition diagonally that captures our attention yet calms us at the same time. Hassam was a truly unique painter with a razor sharp eye on the changing world around him...something us artists of today need to understand also. Poetry is shutting our mouths and opening our eyes, and not the other way around as it usually is today. Hassam knew that without that poetry, that inner search for meaning in our art, we are no different than that woman staring at herself in the mirror missing out on life all around us.