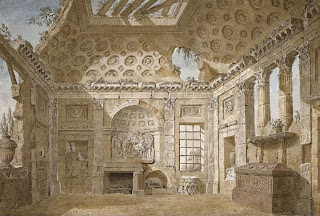 I first discovered Charles-Louis Clérisseau in Rome two years ago at the Galleria Corsini, and I remember being stunned. It was a painting of the Pantheon. The cool shadows, confident lines, deep textures and thick bright highlights created an impression that was life-like yet those juicy brushstrokes were hypnotic. I had never heard of him before. And it seemed criminal that a great draftsman and artist would remain in obscurity, high on corner wall of a Roman museum that even the taxi driver couldn't remember. At any rate, he's definitely worth studying.

Charles-Louis Clérisseau was born on August 28, 1721. He studied under Pannini and was also a friend of another great architectural draftsman and architect from Scotland, Robert Adam. This style of architectural renderings and paintings formed the basis of Neoclassicism and inspired many Brits to travel across Europe on the "Grand Tour" to experience the wonders of the past. Clérisseau's career influenced many architects, including none other than President Thomas Jefferson, who collaborated with Clérisseau in 1785 to create the Virginia State Capitol building in Richmond. Classical or Neoclassical architecture is something that a photo cannot replicate...it needs to be experienced in person. At any rate, some of the renderings here provide an insight into the mind of an architect who made ruins look more heavenly than few others ever could. 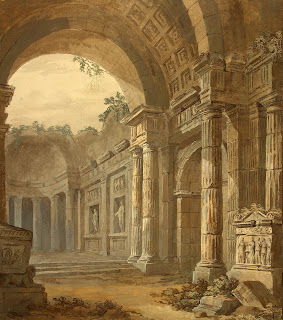 Sunlight bathing giant columns was a common motif in Clérisseau's work, and for good reason. If we look carefully at this rendering, probably done in gouache, we can see that the lines are not as perfectly straight as they seem upon first glance. Clérisseau creates palpable texture by enhancing the thickness of the columns with very warm earth tones to contrast with greenish-greys in the shadows. The foliage is but mere squiggles yet again, combining warm and cool tones our eyes glance over them without analysis. Clérisseau is a master of creating a real sense of scale and majesty, yet the lines in this piece make it inviting enough to try ourselves. 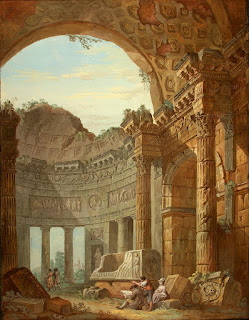 Here Clérisseau combines warm and cool to create atmospheric perspective and space. Note the foliage is light green. The curved shadow across the building in cool tones is a great touch, and adds verisimilitude to an already fine painting. In the foreground we have figures, which were rumoured to have been painted by Antonio Zucchi. Clérisseau uses light to create beautiful sensuality from cold, hard marble in decay, and it is not difficult to see how he inspired so many after him. 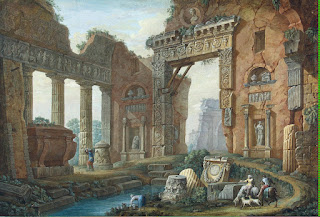 
One can see how he used variety of architectural scale and detail with color temperatures. He truly loved Classical architecture. Here is a predominantly cool toned palette with warm colored walls. I like how the circular path leads the eye around the composition effortlessly, and the bright blue pond provides a nice accent that also leads the eye through the arches out to the far distant background. 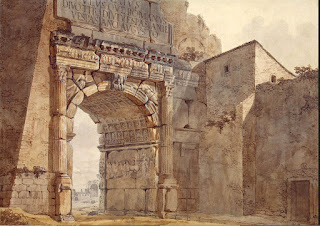 Arch of Titus in Rome

An incredible watercolor painting, Clérisseau's grey wet-into-wet shadows on the wall add a sense of texture and scale without his usual attention to detail. Note how that bright triangular glow of sunlight hits the edge of that high corner. This is quite an angular piece in stark contrast to his other pieces. The inscribed Roman letters above the arch have a deep solidity that seems to defy the medium, palpable and gritty yet all under the careful washes of his brush. Clérisseau celebrated the past and in turn, created a world that invites us, that takes pure fantasy and makes it as real as our eyes can believe.