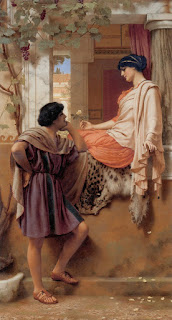 John William Godward was born on August 9, 1861 in London. Here was an artist at the end of the Neoclassical era, a disciple of Sir Lawrence Alma-Tadema, who had such deep respect for the Classical world, who would both research their works with strict attention to authentic architecture and costume, so much that decades later film directors used Tadema's paintings as visual reference and inspiration for their films. While Alma-Tadema's career was successful up until his later years, Godward unfortunately was too late. The Victorian Neoclassicism that England loved during the 1800's would eventually become obsolete from the transmogrification of art movements in the 20th century that challenged everything and anything that came before it. Tenets such as beauty and harmony suddenly became profane and old-fashioned, and art critics acceded to their modern thrones quick to denounce anyone who didn't follow their creeds. The world was changing fast, and Godward's career wasn't going very far. His family, disapproving of his artist life in a modern world essentially disowned him, to make matters worse. Sadly, he committed suicide in 1922.


In The Old Old Story above, we see a familiar scene of courtship. The woman casually plucks rose petals to the ground while fixing her gaze sharply at him. Note the near complementary color contrasts of robes. Very soft shadows beneath the vines spread across the doorway. The repeated motifs of this Victorian-Neoclassical world are evident here...vibrant foliage, Classical architecture (balance of nature and Classical world), complex drapery, animal-skin rugs, affected poses, beautiful women, and a Utopian-like dreamworld; Tadema's influence runs deeply throughout all of Godward's work. There is a pureness to this serene realm, so specific yet so vague at the same time, real and unreal. The cast of characters in Godward's world may be decidedly British or pseudo-Roman, yet the overall feeling in his work is very feminine and innocent. It echoes the opulence of the Victorian era with statuesque subjects projecting a model of moral and physical perfection, maybe an anachronistic one, with a hidden sensuality trying to burst through the surface. If we look closely beyond the sentimentality, Godward wasn't merely trying to copy or imitate the Classical, but to give his women intelligence and thought, which was in sharp contrast to the conservative age he lived in.

A beautiful, sculptural Roman-like woman, Godward portrays her in a surprisingly casual pose in spite of her perfection. Her skin glows, and the soft shadows of her skin are almost airbrushed. The brushwork on the green wrap is painted so well it feels tactile. Again, the sentimentality may overwhelm many who look at this type of art, but there is a lot of intelligent color harmony going on here, and Godward learned well from his master that background details are what create the setting for the characters. The wistful quality of the woman here mirrors England herself, late in the painting and sculpture compared to the rest of Europe, and tries to casually regain the glory of the past before it disappears completely.


Incredible detail in the drapery here, Godward's use of combining warm color palettes by contrasting value is worth noting. If there is any prominent weakness in Godward it is in a lack of use in light and perspective, in every sense of the word. Yet in spite of this, the sheer charm that he exudes in all his work is clear in this piece also...seductive and innocent, posed yet natural, serene yet lost. The more you look at Godward the more you see himself in his works, a man lost in an era he cannot exist in, an anachronism himself...unable to escape his utopia from the reality of the ever-changing Industrial world he could not acknowledge. This is one of his best paintings. Godward uses drapery and costume to showcase his ingenious color harmony, contrasting not only color but texture and size of material. Her skin is absolutely amazing here. Warm shadows and flawlessly brushed highlights on her arm and neck. The flowing tresses of her hair are hypnotic. What is confusing is the marble wall as background— why did he use this? It seems like an extraordinary amount of labor for something that our eye wants to ignore anyway. At any rate, the colored marble slab with the mirror has an amazing reflection of the wall itself on the side. This painting definitely sets him apart from Tadema as a great painter of women.


One can see a very similar likeness to the model in A Fair Reflection above. Unfortunately this image is blurred and retouched, but we can imagine the attention to highlights and smoothness of skin tones. Interestingly, here we see a clever use of perspective in the floor tile, which again must have been excruciating to paint (at least for me it would have!). Godward uses some complex colors along with contrasting vertical and horizontal shapes, and again the contrast of textures and materials. This is a sensual nude that not only has a strong Classical structure but is very feminine, as I mentioned earlier from his Tadema influences. Godward appears to bring cold white statues to life in full-color, and yet the effect is warm and immediate unlike most other kinds of Academic art.

This is a true gem. Had Godward painted more like this, his career may have gone in an entirely different direction. His knowledge of color transforms this idle scene into captivating poetry. How often do you see red leaves on a tree in a painting? This was not the work of an artist who merely copied or made sentimental pretty pictures...this was someone who got lost in the shuffle and suffered the humiliation of obscurity in his own lifetime. The so-called art critics, especially John Ruskin, who despised Tadema and this kind of painting, need to be recognized by the general public as symptomatic of the crude and fickle fashion-world-like art world that pervades our culture. Art definitely has had its movements throughout history, but in our contemporary context, we have the privilege of seeing the last five centuries of art and how it shaped our world. People like Godward tried to pay tribute to that past, and instead we rejected sentimentality to look toward our own narcissism for answers. Had Godward been alive a mere generation before Tadema his life may have been very different indeed.