Born on the 21st of September, 1852 Edmund Blair Leighton was an English medieval painter from London. He was known for a highly accurate and detailed realism with a vivid palette and figures with decorative costumes. Leighton's work has a strong narrative, and when he wasn't painting Medieval themes he often explored romantic concepts and, like his Pre-Raphaelite contemporaries, may have been influenced by Lord Tennyson.

If we look at In Time of Peril above, Leighton creates a drama right out of a scene from a novel or drama. I love how the figures looking back at the old man direct our eye to him, while the child looks in the opposite direction toward where they are headed. By making the composition in two-point perspective, Leighton heightens the drama that they are in danger and eager to escape wherever they came from to arrive at a monastery. He creates vivid contrasts in texture between the water, the costumes of the figures, and the heavy stone wall of the fortress. By using atmospheric perspective and soft, slightly foggy light that fades into the far distance to contrast with the richness of their clothing, he ensures that the figures on the boat are the main characters of this story in mid-action. Leighton uses an earth-tone palette of warm hues to contrast with the murky grey walls beside them. Illustrators today would marvel at this ingenious use of suspense and realism. 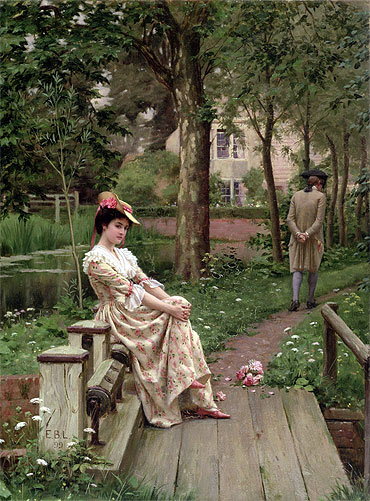 I love how Leighton creates a narrative with action that is already completed. In this case, a man walks away after a rejection from a marriage proposal and the use of body language in the arms here reveals everything we need to know about the two characters. The woman sits firmly, grasping her knee to reinforce her decision, with flowers dropped at her feet while the man puts his arms behind his back in an attempt to maintain dignity. Leighton's incredible attention to detail here is breathtaking. Look at the intricate floral pattern in her dress alone. Yet this peaceful, verdant setting is relaxing to the eye, with multiple vanishing points to pull our eye to where the man is headed. This is like a scene from a novel captured effortlessly...making us want to know more. 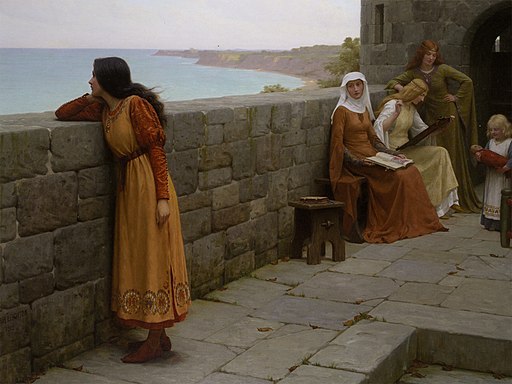 A young woman staring out into the ocean, waiting for someone...or hoping for someone. The figures off to the right help to reinforce this narrative with the two women and child occupied by their adult and child diversions, while the older woman reading turns to look at the main figure with a questioning expression. Again, we see everything we need to understand the narrative. What is also interesting here is the use of colours and textures. The women to the far right, indifferent to everyone are depicted in cool greens and yellows, while the woman reading is in warm darker tone to the main woman looking off into the sea, as if to visually convey empathy for her. The main figure looking off also has more intricate patterns in her dress and sleeves as if to convey more intelligence compared to the other figures. This is a great story here. 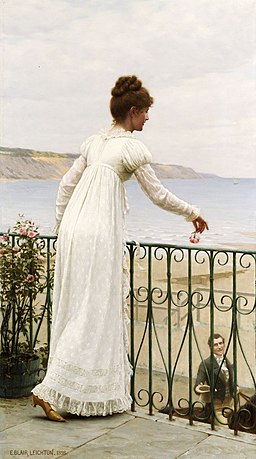 Great composition. Love how Leighton makes the female not only the main figure but larger, taking up most of the composition while the man below the balcony is a small figure riding on horse holding out his hat to the flower she offers him. Look at the way he paints her delicate dress with greys and floral accents. The grey sky above softens the light and improves her complexion; a clever choice since harsh sunlight may have changed the meaning of the painting and risked destroying the delicate pattern of her dress. Apparently, the high heels were not yet fashionable during this period yet here it adds an elegance and height to the figure which does not detract.


Although this is a poor quality reproduction the intimacy and drama of the scene are still intact. I love how the woman is actually singing aloud while playing piano, and we can almost hear her voice. The reverend looks on and is clearly taken both by her beauty and her voice. I like also how she is painted in white, innocent, with the daylight spilling onto her while the reverend is dressed in black and in partially in shadow. The confidence in his body language, predator-like, seems to suggest he is going to make his move after the song or the lesson, and no one will know. Love the way the ochre tones of the walls behind him in the corner convey a muted shadow tone that verges on greyish-green, while still revealing details of the interior. 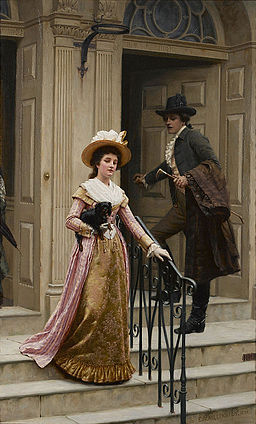 An amusing painting of a young woman leaving while a man enters, checking her out over her shoulder. It isn't clear what type of institution the building represents but clearly she is overdressed and seeking attention in this lovely yet eye-catching dress. Leighton captures the shimmering, floral pattern with apt brushwork. She seems to look knowingly at us as if to suggest that she can flirt while still being a lady, while the man is definitely gaga over her. The dog, as always represents fidelity and this case may hint she is married. Love the deep brown texture of the jacket he drapes over his arm. And the way the door he is entering gradually fades into darkness.

Leighton is a first-class storyteller and painter. Although some of his work is admittedly sentimental, when he is firing on all cylinders his work is inspiring and worthy of study for any artist. He reminds us that not all stories require explanation and that intrigue is more compelling than simple realism. We want to imagine the character's mind and lives. We want the mystery.