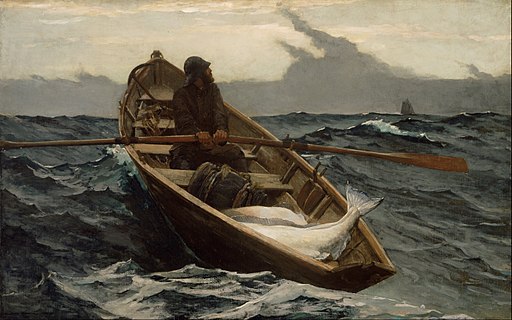 
Born February 24, 1836 in Boston, Winslow Homer was an American painter and printmaker. Homer was largely self-taught, working in both oils and watercolor, known for combining the landscape and sea with figures. His work is characterized by a bold palette, vivid textures and often dramatic use of light. Homer painted in such a way that he immerses the viewer into his subject matter using all of the senses, particularly in his seascapes. With his stylish, walrus moustache and skimmer hat Homer traveled throughout Paris, England, Canada, Cuba and America with instinct that captured a land in a way that is strangely hypnotic and present. His influence spread far and include artists such as Howard Pyle and N. C. Wyeth, among others.


In The Fog Warning above, Homer uses a low perspective and props the man in the boat at a strong diagonal to really emphasize the undulating current of a restless sea. Yet despite the choppy waters the fisherman has caught a good fish and pulls hard on the wooden oars while looking over his shoulder to the ship he will return to. Homer paints the distant horizon in a warm grey with the sky above in a pale, greenish-yellow glow that suggests optimism despite the challenges of nature. Where Homer really sings is in the broad, impasto brushstrokes of the waves. Anyone who has ever been to sea can readily see that Homer accurately depicts the range of blues in the ocean from very dark to icy light blue. He focuses more on the motion of the waves and the dramatic angle of the boat rather than the fine misty detail that many artists depict. He is not trying to glorify the ocean as most seascape artists have, but portrays it as dark, lurid...haunting: 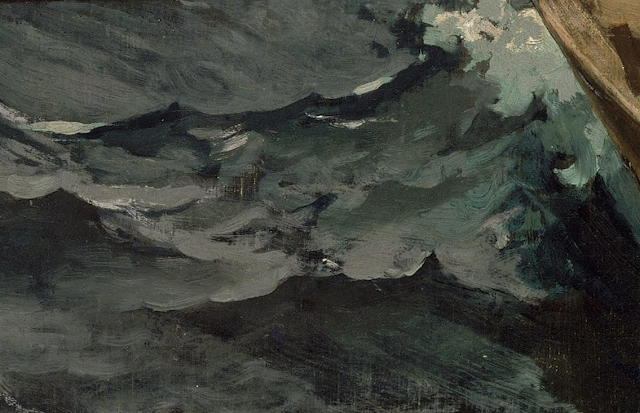 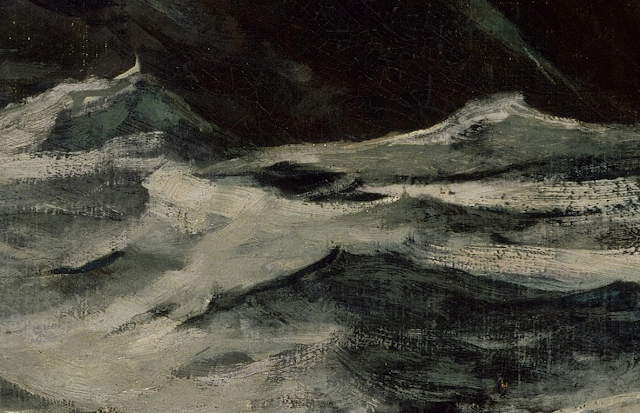 detail near boat, The Fog Warning

yet if we look at the distant ship he is trying to sail toward, the waters there appear less choppy: 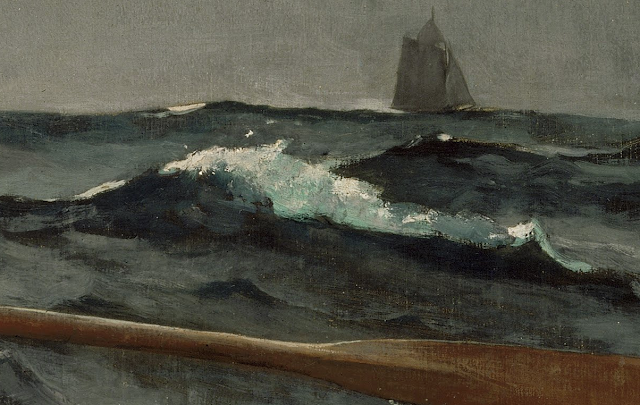 Homer seems to suggest that if he can make it past the present difficulties it will be smooth sailing, literally toward his goal of safety. The fisherman carries himself in a self-assured manner, seated confidently, knowing that despite the vast distance and approaching fog he will be alright, so long as he doesn't give up. There is a strong humanistic theme in this painting and although others see it differently, to me he is courageous and has no time for panic or despair. The warm tones of the boat itself reinforce this idea, with yellow ochre scumbled across the brown hues of the boards. A magnificent painting. Truly inspiring. 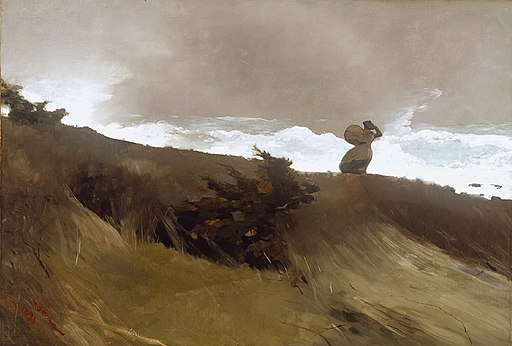 Love the mood here. Homer captures a moment before an impending storm with a dark, reddish-grey sky and long grass of the foreground blowing in the wind. Once again Homer uses a low vantage point to heighten the drama. The sky itself is surreal...look at how bright the whites of the horizon are painted around the woman, yet as we look leftward it turns into wispy greys that meld into the clouds. Homer is fascinated by the force of nature, a recurring motif that, here, has a similar theme to The Fog Warning yet has a more ominous suggestion that there is nowhere to hide. Yet it is only rain, in the end. Homer's palette of ochres and olive hues in the grass, reinforced by the strong sway of the trees helps to convey the strong wind. Homer does away with the postcard perfect view of nature and instead pulls us into nature, encouraging us to inhale the air and taste the moisture in the wind blowing in our faces. It is a moment in time that will never return, and despite nature's force, is exhilarating...which is why the woman stands atop the hill to see instead of run for cover or hide under an umbrella. Nature is something to experience. 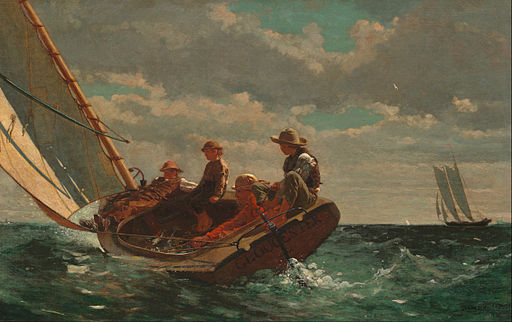 Here Homer takes a very serene and innocent approach to the ocean, this time using very warm, sunny palette with bright, vivid greens and contrasts this with three young boys and a fisherman in warm reds and browns. Each one of these figures is doing something different, which adds visual interest. Homer's brushwork again is quick and scumbled in the greens and whites of the waves. He does not blend, but rather glazes and scumbles light atop of dark to achieve the depth and range of his values. The sky has a warm, mysterious quality that makes it difficult to know exactly what time of day it is...as if to suggest that this is almost dream-like, or a memory in itself. Homer's work revolves around movement, which makes his paintings easy to appreciate and experience. 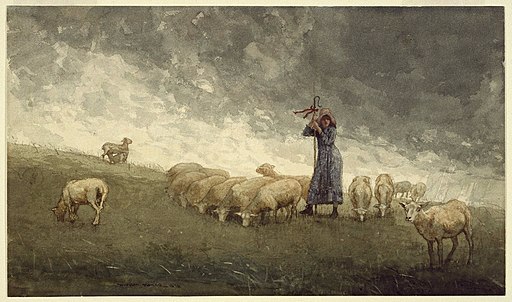 In this watercolour Homer takes an unusual theme of a shepherdess—posing for the painting—and transforms this idyllic scene into a mesmerizing moment in time. Look at that sky. Homer defies the capabilities of the medium with those grays and an eerie glowing horizon. Homer uses warm tones in the greys, more green than grey, going against the usual instinct to paint a dramatic sky in the usual blue-purple hues. Instead, Homer makes the sky and the green earth below more similar than different, which is surreal. Rain is very near and yet neither the sheep nor the shepherdess seem to be concerned. Again, this has a dream-like quality that is difficult to put into words.

This composition almost has the feel of a David Lean film. Homer chooses a wide-angle view of a warm summer afternoon at the beach, yet what captivates here is the use of warm tones. The sandy cliff contrasts seamlessly with the deep grass, and the sky itself has yellow glazes all over it. The two ladies, one holding her umbrella up, the other down proves an amusing counterpoint and draws us into the scene, where the breeze ruffles their long dresses and frilly necklaces. Homer also paints all of the background figures with a sense of movement or simple action with subtle variation of tonality and color while using the umbrella as a motif since this was what people did before sunglasses were invented. Homer has an uncanny ability to make the mundane into something that makes us feel like we are standing there, in his shoes...observing what is happening.

This is such a fun painting yet against that incredible backdrop of the sea at night...the way Homer paints those bright highlights in the water so loosely yet so accurate that we forget we are looking at a painting. The four figures in silhouette watch the ocean with fascination while the two women dance in the foreground to some kind of light source as if by spotlight...the scene has the spontaneity of a camera, and very well may have been photographed. The waves seem to dance themselves. That distant grey-blue night sky balances the busy foreground, and in the end this painting is all about some people having fun at night at the beach...yet somehow more than that. Homer seems to be saying that we all appreciate things differently and that while some observe, some need to be observed themselves, while the sky itself is like a giant backdrop in this outdoor play.

Homer was a unique painter that recorded his world and nature by immersing us into it, using all of the senses...reminding us to appreciate how fleeting time is. Every element in the painting serves this gentle reminder, even the loose brushstrokes...that appreciation of the moment, is not just art but life.