Born in Copenhagen on July 22, 1860, Paul Gustav Fischer was a Danish Naturalist painter. Fischer has a palette and tone that is more British than many of his fellow countrymen, although his depiction of everyday life in pure Naturalist form is definitely Danish. His work has an atmosphere, a narrative that asks questions more than it illustrates—in short, he conveys presence.

I love A Fire on Kultorvet above. Look at how we are placed right in the middle of the action, without explanation, as if happening right in front of us. This painting works on so many levels: historically, compositionally, atmospherically, and of course visually in terms of palette and texture. Off to the right a firefighter feeds coal into a steam-powered fire engine, a complex and very heavy machine...revolutionary for its time. Note off to the far left a firefighter operates what was back then a modern invention, the fire hydrant. The huge crowd watching is conveyed brilliantly with loose brushwork and monochrome browns to depict an event that was a public spectacle, something that today would be nothing more than a 20 second spot on the evening news. I love how Fischer uses body language of the firefighters to convey the sense of control in handling the situation. The smoke is painted in a greyish umber that creates a haze in the far background. Fischer enhances this smoke especially coming from the top of the steam pump fire engine with those beautiful brass colors and that red wagon wheel. The red ladder provides a visual dynamic that leads our eye to the architectural detail of the foreground building and the elegant lights suspended from its corners. This is a moment of history frozen in time, elegant and yet intriguing in the way Fischer conveys what today would be a mundane subject. 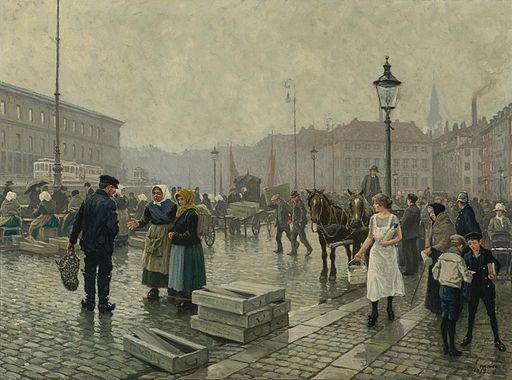 The Fish Market at Gammelstrand, Copenhagen, 1919

Fischer's figures here are painted in a cartoony sort of manner, but what is striking is the use of light that is more in common with the Dutch Grey School than Danish painting. Van Gogh would have been completely fascinated by the tonality of that sky that is reflected in the cobblestone streets below. Pastel blues, greens, muted yellows, and greenish greys...even magenta in some areas...this is the eye of a very keen observer. I love how the far background buildings in the middle are a smoky dark grey magenta. Anyone who has ever been in Europe on a rainy overcast day such as this knows exactly what the tone of this painting is about. Again, Fischer uses body language and costume to tell the stories of these people in their daily lives.

The Passage of Vesterbro with a view of the Frihedsstotten, Copenhagen, 1899

It is unfortunate that Wikipedia's version of this painting is fairly low-res. Fischer portrays Copenhagen in an era of peace and cultural flourishment known as the Danish Golden Age, which I will explore in future posts. Compositionally, it is nothing brilliant in its use of one-point perspective but I like how Fischer uses crossing the street as a theme to depict meeting the opposite sex in a Danish late-Victorian era. Again, Fischer's cobblestones are incredibly painted here, so well in fact that we forget them. The sky is a rough impasto of neutral blues and dark oranges. I like how Fischer uses that pinkish-orange in the far background building to convey atmospheric perspective and depth. Frihedsstotten, or Liberty Column, is a faint object in the distance (read more about it here). The trees serve to embrace the entire composition and add a richness to what would otherwise be an uninteresting view.

This is from a series of paintings Fischer did in depicting beautiful nude women sunbathing, an interesting subject for a post-Victorian Denmark. While most of Fischer's work in this theme reveals a weakness in his technical ability of anatomy this piece has an innocence and true naturalism to it. Fischer's palette is unusual here, too. The sand has warm purple tones and the sky itself looks like mottled cream in a bowl of dull blues, while the vegetation is vibrant yellow-greens.

Fischer is an artist whose sensibilities are both masculine and feminine, controlled yet free, and factual yet mysterious. The freedom to explore any subject matter we choose as artists often lends itself to fixation, but Fischer is a storyteller whose brush and eye captured not only an era, but moments that are fleeting.