Anton Mauve, The Power of Simplicity 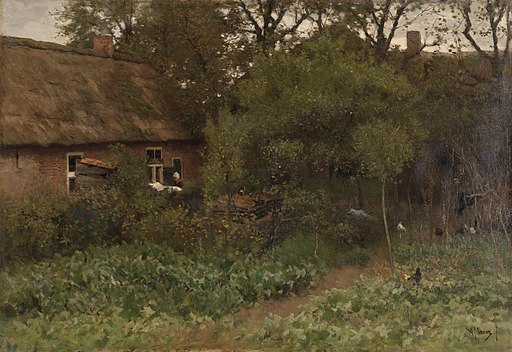 
Anthonij (Anton) Rudolf Mauve was a Dutch painter born on September 18, 1838 in Zaandam, northern Holland. He was a leading member of the Hague School of painters in the late 1800's, and outside Holland not well-known except for his connection to Vincent Van Gogh, whom he influenced greatly. Mauve's work focused on rural motifs that captured the everyday farm-life under the often characteristic overcast skies that define Dutch landscape art and the Hague School, hence earning them the curious nickname the Gray School. Mauve's early art instruction were from more formulaic Dutch painters that Mauve sought to break free from into a more naturalist approach using color and mood to heightened effect. Action and composition were not the primary forces that motivated Mauve, but rather the way people moved, how they worked, and the scenic atmosphere under which they lived. Mauve would eventually evolve into another school or rather art colony, called The Laren School which grew its inspiration from the very inhabitants of Laren in northern Holland.

In The Vegetable Garden above, Mauve clearly reveals his painting on location approach. Despite the prominent green tones it is the background farm houses—against that grey sky— that frame the composition and give it a warmth and presence that is inviting and real. Look closely at the foliage and see Mauve's brushwork uses an intricate assortment of yellows, greys, ochres, even blues in certain areas. We can easily appreciate how much care and effort Mauve took into suggesting the individual leaves of those birch trees to contrast with the darker-toned leaves of the trees leaning across the farm house. Pay attention to that silvery grey sky behind it all: the left hand side is a very cool grey yet towards the right hand side behind the trees, Mauve suggests a slight warmth of a sun buried deeply behind cloud. Anyone who has ever travelled to Holland or northern parts of France and Belgium can understand this unique natural light. Mauve paints the straw roof of the farm house with such tactile brushstrokes, suggesting green patches to break up the brown tones. The lone figure is merely to illustrate the scale of this garden. Mauve takes a very simplistic theme and by his keen eye draws us in so that we are inhaling that cool rainy air and standing in his shoes to witness a moment in time that invites us to linger for a while longer.

This is the kind of painting I like not only because of its execution, but the way its subject matter defies convention. Painting cows in the field next to a river is not the first thing that springs to mind for a landscape artist, especially in today's brand-driven society. Mauve makes this work with color temperature and low-key values. The drama of this late-afternoon sky threatening rain with a small group of cattle in the foreground, bathed in a warm pool of sunlight, with rich greens and earthtones on the field is beautiful. He creates wonderful contrast with the soft clouds above to the textures of the grass and animals below. Note how Mauve arranges the cattle. The mother stands horizontally off-center, while the calf next to her faces us, while the other two lie beside them in alternate directions. The effect both withdraws and retracts our attention simultaneously. Mauves use of perspective here illustrates the vastness of the river valley while keeping our eye on the natural presence of the cattle in the foreground. Looking above we see Mauve's variety of tone and hue in the clouds with colors ranging from yellow all the way to violet, green, blue, white and of course, grey. The clouds ultimately frame the entire composition and underline the vastness of this view from this angle. The way Mauve articulates the atmospheric distance of these clouds and their drama despite the simple pastoral scene below clearly reveals how landscape art requires such astute observation and respect for nature. Here the subject is not merely cows lazing around; it is nature itself, in all its beauty and diversity. 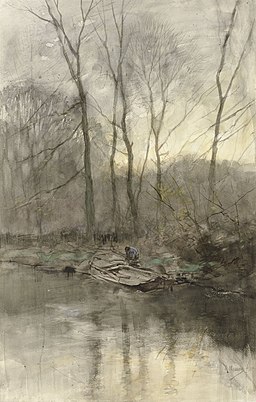 
Mauve's brilliance with media here is exemplified by a watercolor drawing in monochromatic tones. Mauve appears to combine the charcoal or graphite with the watercolor in the dark areas to heighten the drama, while resisting the temptation to flood the image with detail. Mood supersedes information here. Yet Mauve pays particular attention to the line quality in areas such as the boat, figure and overall shape of the trees. Using that pale yellow wash to indicate a fading sun behind the trees is genius. And he echoes that light with thin strokes of orange in the reflection below. Color accents are deliberate and indicate the figure, trees and reflection of the foliage. Note the way Mauve scumbles color so subtly into the trees. I am sure had Sargeant seen this watercolor he would have been impressed by its power and understatement. Poetry is not what you say, but all about how you say it, how it feels. 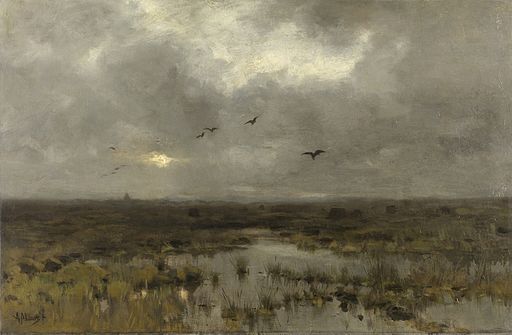 Mauve's somber grey tones permeate this barren isolated swamp. Mauve contrasts again the sky with earth by cool to warm, soft to grassy textures. (Note how the painting remains in good shape, with minimal cracking only in the whites of the sky). The distant background that meets the horizon, with those indistinct fuzzy shapes, adds such depth and presence here. Rain looms behind it and threatens to come down, even with the faint burst of sunlight behind those clouds. It is the random arrangement of birds that completes this painting and makes us feel like we are outside watching this humid, cool scene with our muddy shoes. Joseph Zbukvic, the brilliant Australian watercolorist commented in a recent interview that in a landscape painting "the sky is the eyes of the painting" and here, these words are truer than ever. The point of landscape art is not merely to illustrate a view, but to realize that we will never understand the vast mystery of nature. 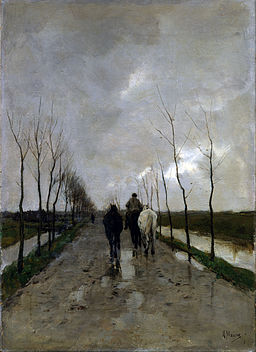 Mauve has an eye like a photographer, I just noticed looking at this painting. It is spontaneous. Simple, yes but natural. Horses walking through a slick muddy road against an overcast sky. It's so simple yet meditative. Look at how those trees form a fuzzy line of perspective on the left side. Mauve's warm greens line the path up to the distant field. Yet once again, Mauve's sky is hypnotic, trance-like in its simplicity. That bright opening of white on the right hand side breathes life into what would normally be another overcast scene. Mauve searches only for the truth of his surroundings, the unpretentiousness of his people in their natural environment, and in the process breathes life into his brushwork. One can imagine how Van Gogh was inspired by looking at his work. He clearly took his own direction in exaggerating that simple truth for his own reasons and created a following that not even Mauve could have ever imagined, but here, looking at his work, Mauve did not fail. His vision of an honest, rural Dutch world may go unnoticed today, but how he portrayed that world is pure inspiration.