Dispute between Minerva and Neptune over the Naming of the City of Athens, 1689

In the above Dispute between Minerva and Neptune over the Naming of the City of Athens, Houasse divides the painting with light to add a stark drama to an otherwise Classically formal composition. Taken from Ovid's Metamorphoses, the first king of Athens, King Cecrops was looking for a patron god or goddess for his beautiful city, and both Mineva and Neptune fought to win the favor of the gods. Neptune creates the sea by striking his mighty trident into the ground, and while impressive, the gods didn't much care for salty water, so Minerva (or Athena) creates an olive tree, which was more fruitful and sustainable, impressing the gods and winning the city its new name, Athens. Neptune apparently becomes pissed at this decision and decides to flood the city and create a water shortage that legend claims continues to this very day. Note how the gods sit atop the clouds in groups that fade into the distance, while the foreground figures of Neptune and his followers are swarthy and low to the earth. I'm not sure of the significance of the drowning horse, but it most likely has a military reference. I like how the ocean nor the olive tree are given particular attention here, but the figures themselves are the subject. Compare with this version by Noel Halle below, who uses a much lighter palette with more emphasis on skin tones: 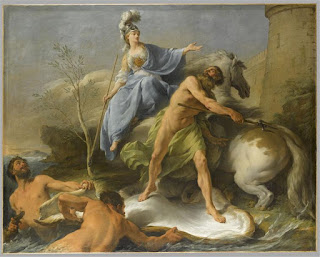 Minerva and the Triumph of Jupiter, 1706

I love how this composition and the action of the figures creates a dynamic sense of movement. Houasse uses a pyramidal composition, and the way he integrates the figures so that each one is helping to tell the story as well as using their body language and spears to point, leading the eye around the painting gracefully so that no element goes unnoticed. Notice how simplistic and dull the clouds behind the figures are, and Houasse punches up the figures by making them sharply detailed with great attention to their drapery and colours. Houasse uses the "bookend" principle I call it, where the figures juxtaposed and on opposite ends face opposite directions for visual contrast and harmony. It is an age-old trick which works brilliantly. Here, what makes this painting so interesting to observe is how he contrasts color, in this case blue and red, by juxtaposing a strong shade next to a tint of those two colors. Note how even in Zeus, or Jupiter, his robe changes from a pinkish-orange to a tint of orange. Houasse uses body language as contrast itself by combining relaxed and dynamic figures. Such a musical and beautiful flow to this painting.

Minerva teaches the art of sculpture to the people of Rhodes, 1688

A very Classical subject, Houasse takes his innate love of sculpture and turns it into a theme with Minerva, Roman goddess of war, wisdom and the Arts teaching the art to budding sculptors in the ancient island of Rhodes. These very sculptors would become among the legendary greats of Greece, producing works such as Laocoön and his Sons by Agesander, Athenodorus, and Polydorus and the Colossus of Rhodes. The male figures in this painting tend to have cartoony faces, but if you look carefully they are quite sculptural in themselves, and in fact Houasse most likely is depicting Agesander, Athenodorus, and Polydorus among the six. I love the strong sense of atmospheric perspective, the way the distant architecture is lit in a soft hazy light. The two children seated on the ground may possibly be a reference to the Roman and Baroque eras that would follow with their own unique genius. Note how the sword of Minerva sits at an angle on the ground to indicate fallen soldiers died in battle. Once again, Houasse uses a delicate palette of tinted purples, reds, blues and yellows, the latter using the Renaissance technique of cangiante. I'm sure Houasse would have an influence on the Neo-Classicist painters such as David a century later, with attention to not only palette but the perfection of the figures and their body language in telling the story. 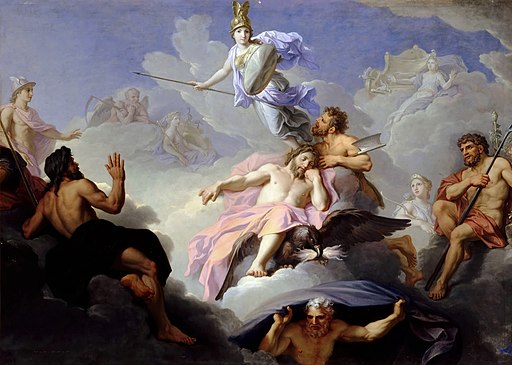 Houasse uses a pyramidal composition here in this earlier work, spacing the figures far apart, in comparison to Minerva and the Triumph of Jupiter where they are clustered together like a tempest. By doing this our eyes focus more intently on each individual figure. According to the legend Jupiter develops a headache from swallowing whole Metis, Titan personification of wisdom so Hephestos attempts to cure Jupiter by splitting open his head with an axe, unwittingly springing forth the birth of Minerva, fully grown and with helmet and spear, ready to kick ass. This rather unique birth gives her a special case of wisdom and innate connection to being a champion for men. Note the awe and respect from the surrounding figures who perceive this strange event. Note the light purples, blues and oranges in his palette here, in particular the cangiante in the robe of Jupiter. Houasse takes a highly unusual mythology and creates an elegant and graceful painting from it, almost effortlessly. 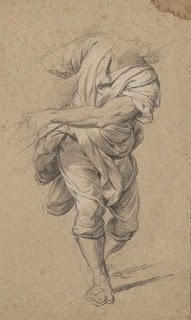 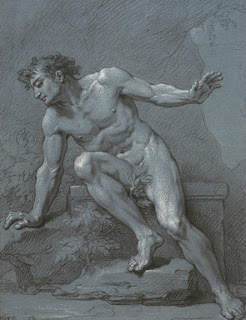 Narcissus at the fountain, 1686

It is sad in one way to acknowledge that the mythology of Classical Greece is outdated in our modern digital world, yet one can't help but wonder how much we have placed irrelevance on important virtues such as wisdom in the process. Houasse may seem passé and formally stiff, but the ingenuity and grace of this subject matter is much deeper than it initially appears on the surface. Minerva may be an ancient outdated concept but her wisdom and patronage of the arts is sadly lacking in today's world, and we need her more than ever. Houasse may lack the penetrating depth of David but what he represents, and the colorful interpretation he offers is important. We need mythology. And we need graceful art.