Born on February 21, 1815 Jean-Louis Ernest Meissonier was born in Lyon, France. A Classical painter known primarily for his military themes, Meissonier is someone who, within his narrow subject matter, shined as a storyteller through his incredible understanding of people and body language. His portraiture and studies of people have an insight that is absolutely captivating.Where Renaissance and Baroque artists were constrained to focus on the drama and exaltation of religion, by this era the Naturalism of everyday life is what distinguished France as the last great country of art. Meissonier was one of those great Masters.

Note the use of perspective in The Portrait of a Sergeant above. Meissonier uses a warm, brick covered wall with a yellowish-grey cobble-stone pavement to frame these soldiers in their greenish-yellow uniforms, who are fascinated by the artist sketching the sergeant. Meissonier also creates depth by varying the distance and overlapping the space between the soldiers, contrasting the soldiers on the left who are standing, with the soldiers on the right seated. What is interesting is how humorous this painting is, despite the stern expressions on some of the faces. The artist as a subject is a relatively modern idea, and Meissonier may have been among the first to depict this concept.


In this battle of Friedland in Prussia, Meissonier depicts the charging of Napolean's French army on the front lines to commemorate its victory over Russia. Noted for its realism and patriotic fervor, Meissonier creates a scene that makes you feel the wind in your hair. The attention to detail, from the anatomy of the horses, the tall grass swaying in the breeze, to the taut faces of the soldiers and details of their costumes is breathtaking. The scale of the painting was created to be seen in person, as it appears less impressive viewed as a small thumbnail or medium-sized image. Each figure is worthy of independent study.

Meissonier was an insightful portraitist that is highly underrated. Here he uses the forward slant of a soldier leaning against a brick wall near a corner to convey a sense of wishing he were somewhere else, looking at a view that is mostly unavailable to us. The expression on the soldier's face is restraint and wistfulness, while the pose maintains his obligation as a soldier even though relaxed. Is he thinking of someone he misses? Meissonier creates an entire story from a single portrait, and his colors seem to reflect the state of mind in this soldier...grey costume, boots with warm overtones, and a glowing brick wall that reflects the sun shining above him as if to heighten the sense of helplessness. Meissonier is telling us that not all battles are external, and not all are fought with weapons, nor are they even visible to others. 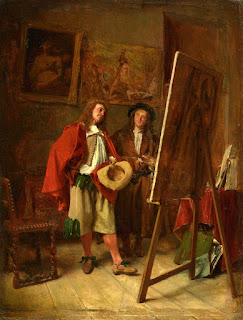 Connoisseur at the Artist's Studio, 1859

Here Meissonier makes the art collector a subject, and once again he demonstrates how body language can be more fluent than words. By keeping the back of the easel to us, we are compelled to use our imagination as to what this artist has painted, and judging by the askew position of the art collector's head it is most likely a reclining figure. Note how Meissonier uses complementary color all throughout this painting. Note however that the artist is dressed in a simple brown coat with mottled bits of paint, with brushes and palette in hands. He seems to suggest the relationship between artist and art collector as subservient: the artist cannot survive without money and the needs of the market. The rough paintings on the wall behind them suggest the importance of the nude and mythology as ever-present staples of the art market. The gesture of the collector's hat tipped forward however, conveys a sense of respect to the work itself, and may also have a double meaning of collecting money into the hat, as the collector is often a seller of art. This is a smart painting, and Meissonier's use of texture and two colors to complete a story is quite clever. 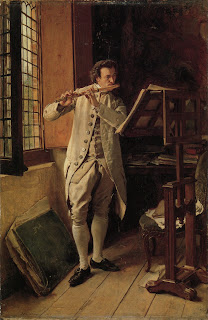 Character is a key ingredient in portraiture, and even in the depiction of the familiar like this young man practicing his flute is a study in body language telling a story. The placement of his feet towards the music easel, hands out holding the flute, reveal the importance of good posture and the discipline of a good musician. Meissonier paints him in a neutral tone, yet elegant, against a warm corner of the room beside a window. One can only imagine those high notes floating in the air and carrying beyond the open window to whomever might be listening outdoors. It is a snapshot of the era also, and a likeable painting for its succinct simplicity and ability to imagine what is being played. 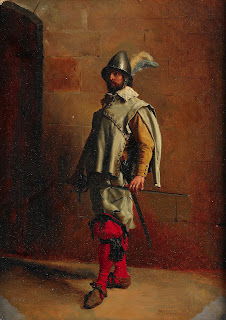 An informal portrait, Meissonier uses dramatic window light with an indistinct shadow to create drama without action. Again, Meissonier's attention to placement of foot direction and hands creates the state of mind in this subject, a young proud soldier. The brushwork on the wall behind him has deep warm reflected light on top of neutral tones, painted loosely to keep our attention on the soldier and his uniform. Note how the placement of the swords mimics the shape of a cross, which I'm sure was entirely intentional on Meissonier's part. Incredible red color of the leggings...look how it jumps out beside the neutral colors of the uniform. It is a mysterious painting, and asks more questions than it answers.

A totally different example than the last one, here Meissonier records the tension and anxiety of a musketeer with an unusual painting and wall behind him that is painted so loosely it appears unfinished for effect. Known for their feisty spirit, the french musketeers were infantry soldiers who fought under the King of France until they were disbanded and eventually replaced by the modern soldier with destructive firepower. Meissonier's attention to military accuracy is also notable, right down to the elaborate swept hilt of the rapier at his side. The face expression is so lifelike it is hypnotic.

Spontaneity and a cool palette create a highly realistic outdoor scene. Meissonier pays close attention to costume and architectural details. Note the difference in body language between the players, with the left player in green decidedly cautious with legs close together while the man in blue with feet apart, as if ready to walk all over his opponent, revealing a highly competitive nature. Meissonier puts us right in the scene, even in the way he suggests gritty debris on the ground where they are playing. I can look at art like this all day long. Meissonier's masterpiece, his genius for multiple figures with natural body language and facial expressions are unmatched here. Note how the perspective point for all the player's faces originates at the hand the boy in blue is holding in his right hand. Meissonier also uses texture and color in clothing in such a way as to be interesting without drawing attention away from the card game nor the expressions of the players. Note also the simplicity of the setting, a barren room dimly-lit to contrast with the characters and their game. Meissonier has a knack for paying close attention to furniture in all of his portraiture, imbuing it with a personality like the figures themselves. This is an incredible painting.


A haunting piece that is largely self-explanatory, it is interesting in how Meissonier uses a simple card game to portray the destructive pride of competitive egos and the zero-sum finality. Note the card off to the right on the ground has two swords on it. Meissonier has carefully composed these two figures in such a way as to flow from the main foreground figure to the distant one in a serpentine S-shape. The grim expression of the figure clutching his bloodied wound heightens the pointlessness of the situation. It also shows Meissonier's true feelings on violence and pride.

A rare glimpse of a painter actually lost in his work, the charm and sophistication of this work puts a smile on my face when I look at it. Only us artists understand the countless hours we devote to our craft and the fastidiousness of our dedication, even when it's only a pretty nude female. Meissonier was a great storyteller and observer of humanity, of our comedy, horror, vanity, and everything that makes us who we are as people. His visual poetry has endless resources for all to learn from.